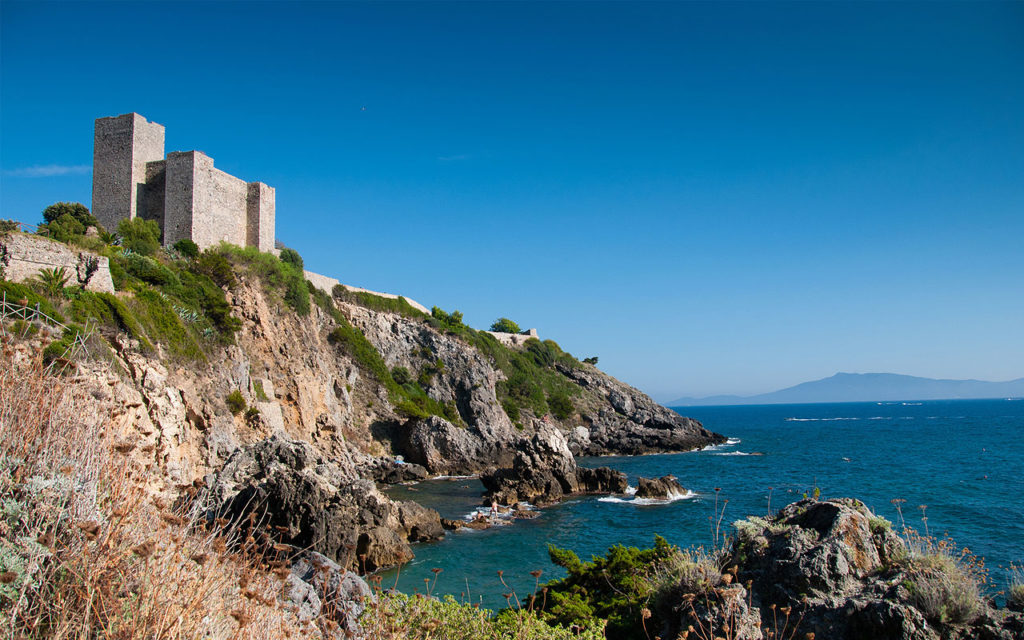 Incorporating all the improvements and innovations of the Sun Odyssey range, this approximately 13m sailboat is fast and easy to maneuver. The Sun Odyssey 419 (42′) can be configured with 2 or 3 cabins. Signed by Philippe Briand, you will appreciate its refined style, the finesse of its lines and the brightness of its interior! 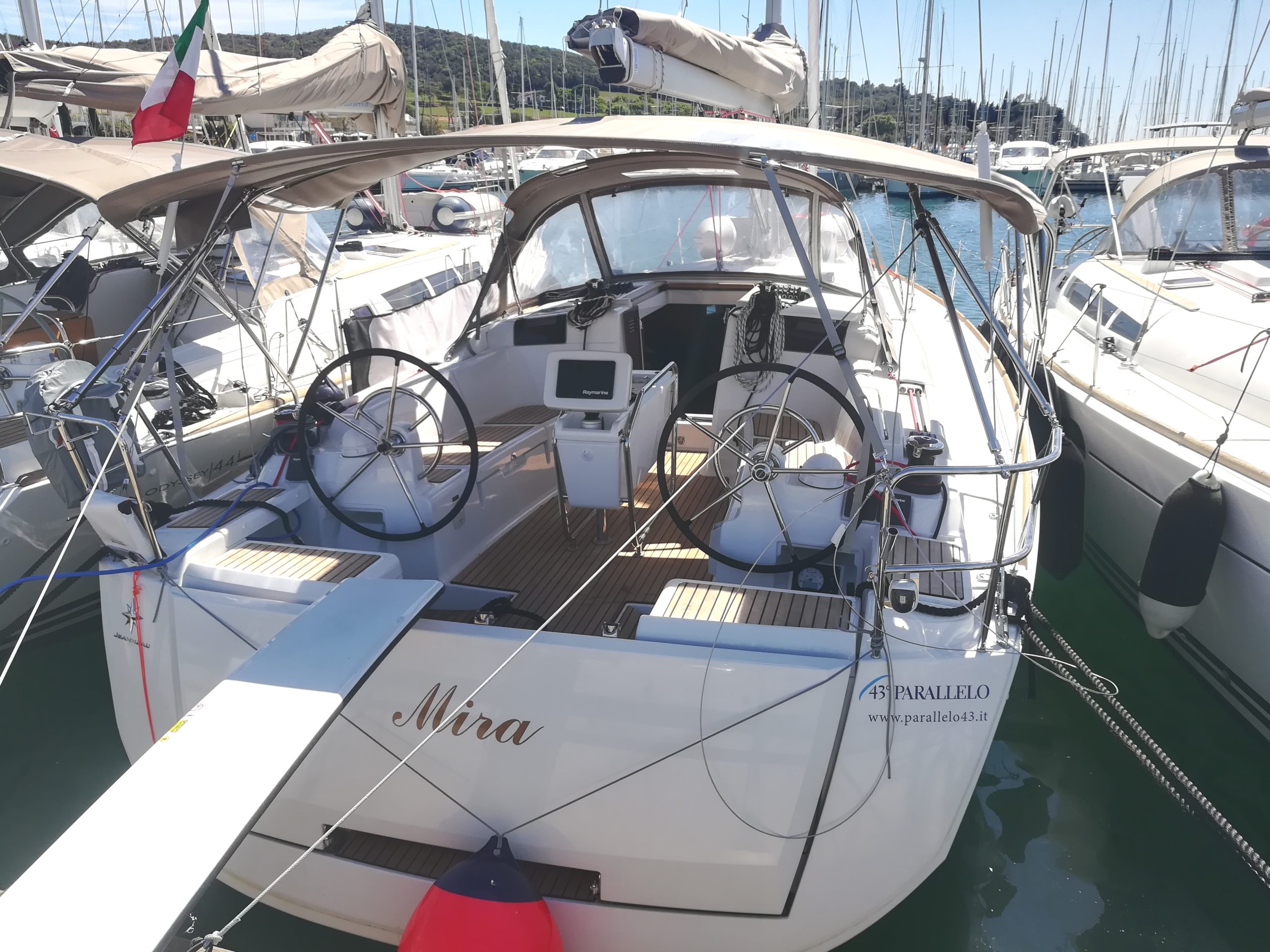 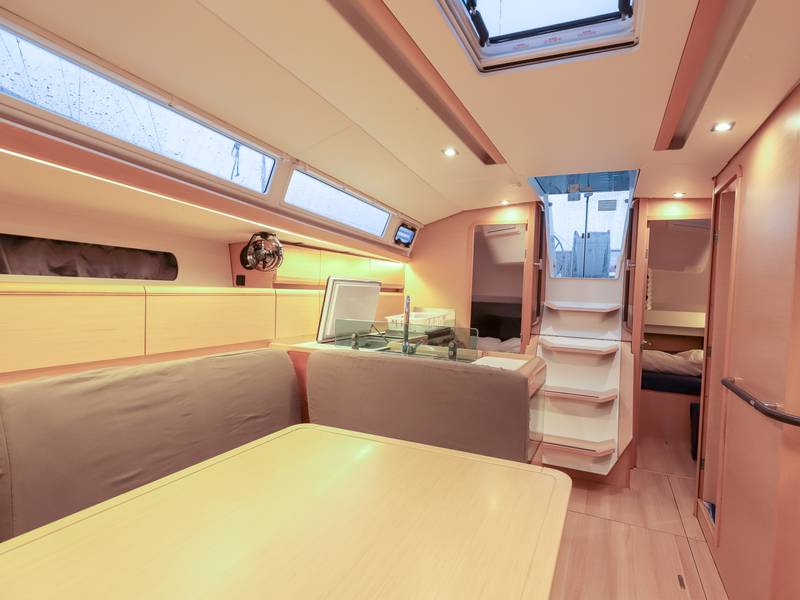 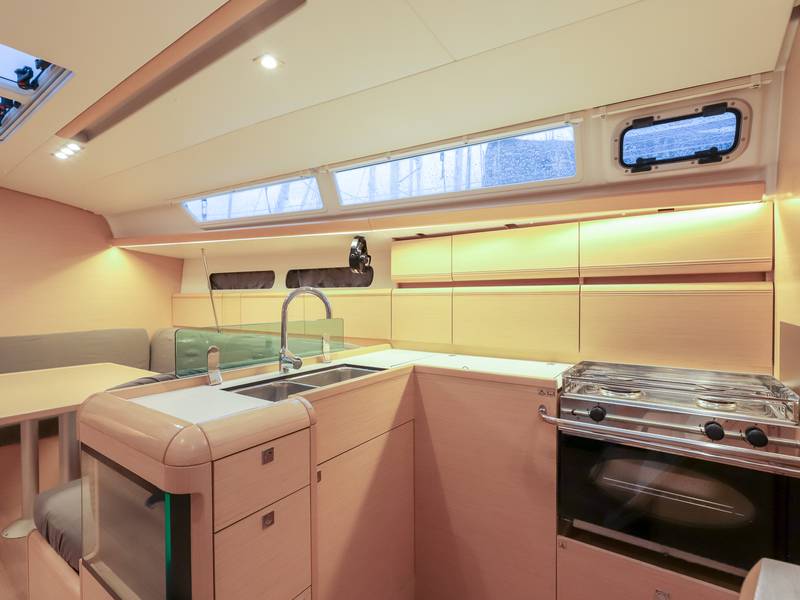 Save to Favorites
Report Abuse

Marina di Scarlino – Portoferraio
Stage: Cerboli
We hoist the sails early to face these 22 miles of navigation that will take us to Portoferraio, the most populated center of the Island of Elba, the small “capital” that became very important, even internationally, with the exile of Napoleon. You can not miss a small detour for the first bath in Cerboli, enchanting island. The clear sea will make us feel immediately on vacation.
Arriving in Portoferraio, we can moor in the ancient landing place frequented, in the past, by Etruscans, Greeks and Romans, the “Darsena Medicea”, or at the moorings of the Shipyard “Esaom Cesa”. There is always the possibility of anchoring in the roadstead. Behind the port “Darsena Medicea” lives Portoferraio and its historic center, with its beautiful views and cheerful and dynamic atmosphere, bars and characteristic restaurants, stores and boutiques. Portoferraio was founded at the behest of Cosimo I, Grand Duke of Tuscany, from whom the city took its first name (Cosmopoli) in 1548, conceived as a military district to defend the coasts of the Grand Duchy and the island of Elba. The city, Tuscan exclave in the Principality of Piombino, at the beginning was little more than a set of fortifications (still visitable and well preserved), as the three forts: Forte Stella, Forte Falcone and Linguella and the beautiful city walls, whose remains, still in good condition and made habitable, surround the historic center of Portoferraio. The imposing curtain of ramparts that rises from the roadstead to the Falcone Fort is still largely visible today. It remained under the control of the Grand Duchy of Tuscany until the eighteenth century when the island, because of its strategic position, was at the center of a war between France, Austria and England. In April 1814, the island was entrusted to Napoleon Bonaparte as the seat of his first exile. Napoleon chose Portoferraio as the capital of the island and in the city are still present and visitable the two villas that were his residence, that of San Martino and the Villa dei Mulini. It was thanks to the reign of the French emperor, that Portoferraio grew in importance and modernity exponentially, as the whole island, thanks to the infrastructure created and the development of iron mines of Rio Marina. In this period Portoferraio became the port used for the transport of iron from the mines of Elba to the continent, and from this comes the current name. Subsequently Portoferraio returned under the dominion of the Grand Duchy of Tuscany until the unification of Italy in 1860. Portoferraio knew an economically stable period, as the whole island, thanks to its mines, until the seventies, when the iron industry went into crisis. The mines were quickly dismantled but Portoferraio, thanks to its beaches, was able to open up to the tourism industry, which still represents the main source of wealth.
Not to be missed: the wonderful panorama from the lighthouse of Forte Stella.

Portoferraio – Marciana Marina
Stage: Procchio
After a nice breakfast we set sail for a swim in Procchio, its enchanting beach stretches for about 1 km, its fine sand and pristine sea make it a popular destination. You can spend the night in Marciana Marina, one of the most characteristic villages of Elba nestled between sea and mountains. The beach, wide and pleasant, is very close to the port and the village.
At the entrance of the port of Marciana Marina you can see the ancient Tower of Appiani, attributable to the second half of the sixteenth century. The first nucleus of the town, called Marina di Marciana, developed in the area called “Il Cotone” (term deriving from the Latin cos – cotis “big rock”), near a natural harbour. Its small inlet also offered mooring and shelter to fishing boats. During the 18th century, due to its port and commercial importance, Marciana Marina was called “Little Marseille”.
Not to be missed: the historical center and the waterfront, typical of the Tuscan coastal villages of the nineteenth century.

Marciana Marina – Marina di Campo
Stage: Fetovaia
Bow on Marina di Campo, one of the most fascinating bays: its beach is perfect for those who do not want to give up any comfort. In fact, it is located in the town and borders the port, which, however, does not create any problems. Behind it there is a pine forest that provides relaxing areas of shade. Attention to the winds from the south: it is better to stay in the roadstead. The pier, in fact, is often insufficient and it is difficult to moor with the sirocco. What about a refreshing bath in Fetovaia? Its beach is considered one of the most fascinating of the island thanks to the promontory that protects it, its white sand bottom and its turquoise and crystal clear sea. It is a must for all sailors who are attracted by the amazing naturalistic background that alone deserves a visit.
Marina di Campo is a small fraction of the municipality of Campo dell’Elba. During the Middle Ages, it was annexed to the Republic of Pisa. The present town of Marina di Campo rose during the following centuries near the plain anciently called, for its peculiarity of wetland, Maremma of Elba. In the municipal territory is also included the island of Pianosa. In the westernmost part of the municipality extends the Costa del Sole, which includes some of the most famous, beautiful and popular places on the island.
Not to be missed: the evocative colors of the beach and the village of Marina di Campo. A lunch or even better a dinner in one of the many typical restaurants … the food will make you lose your head! 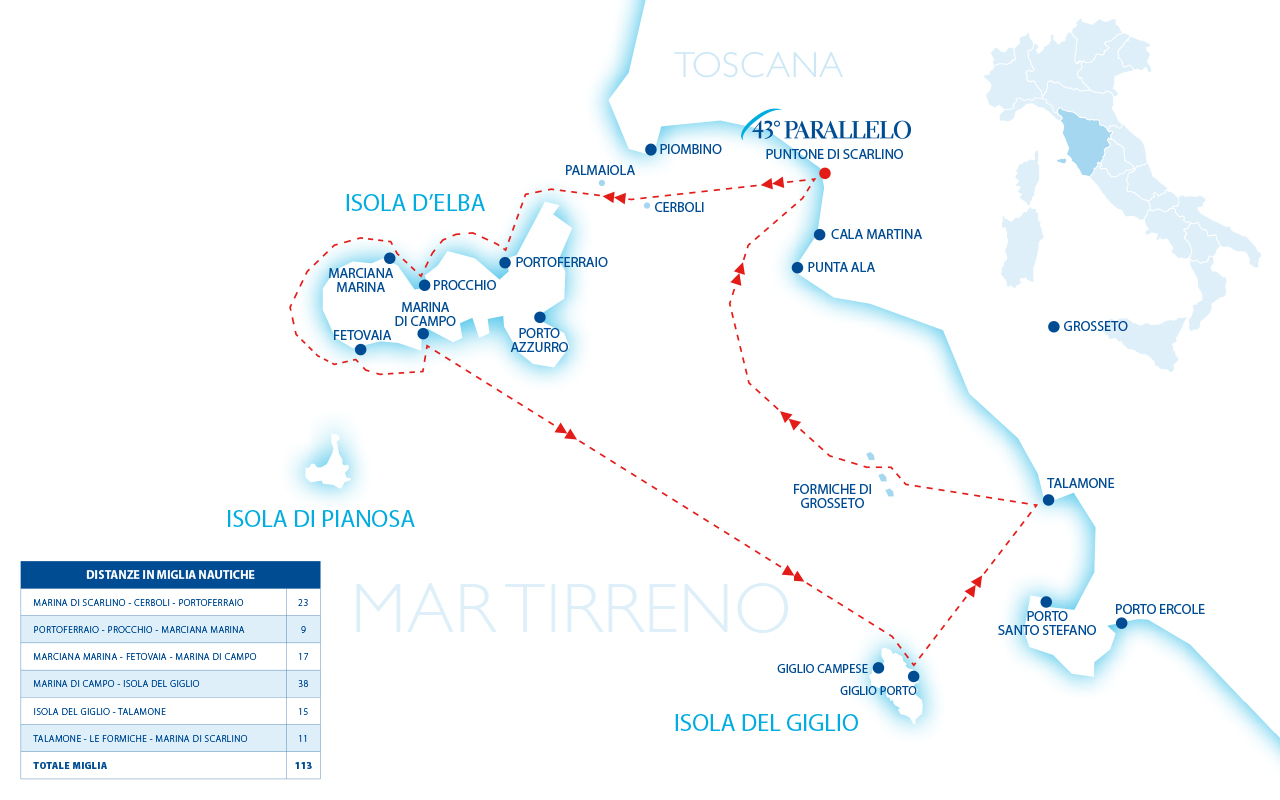 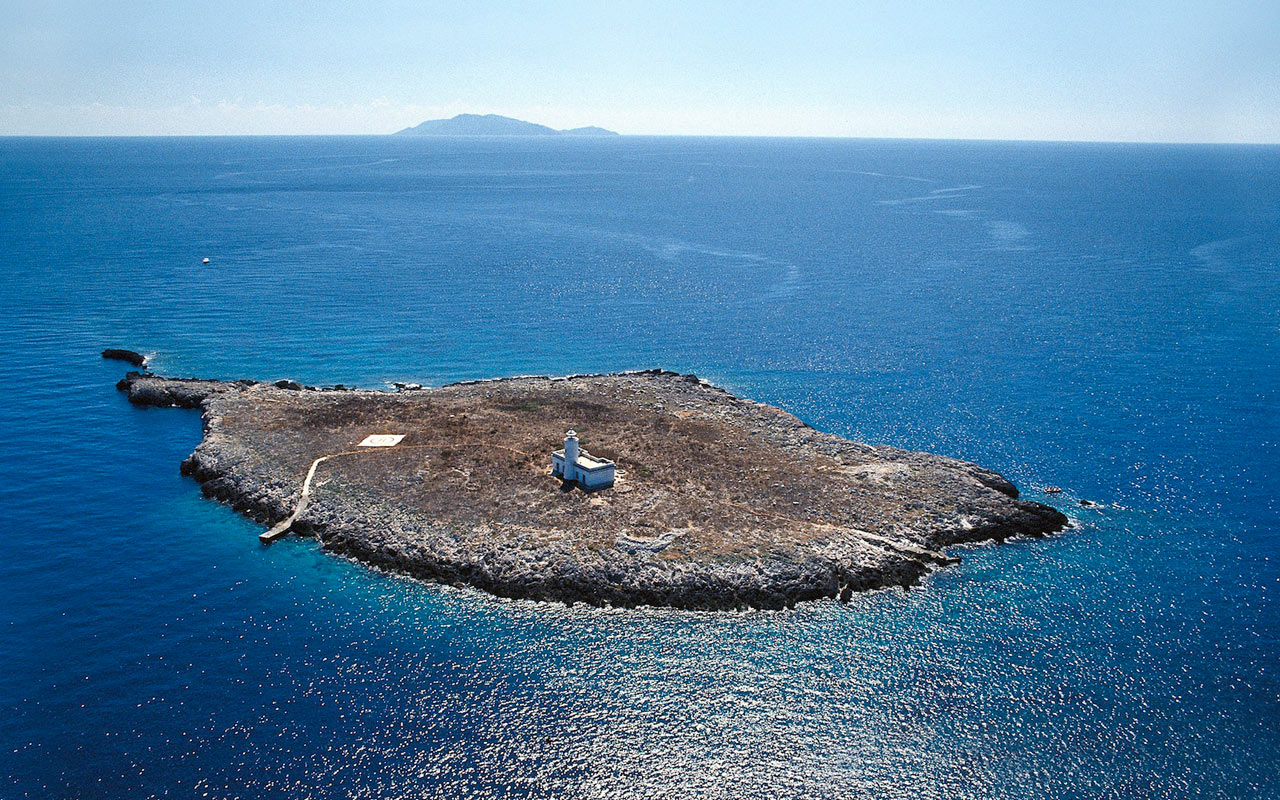 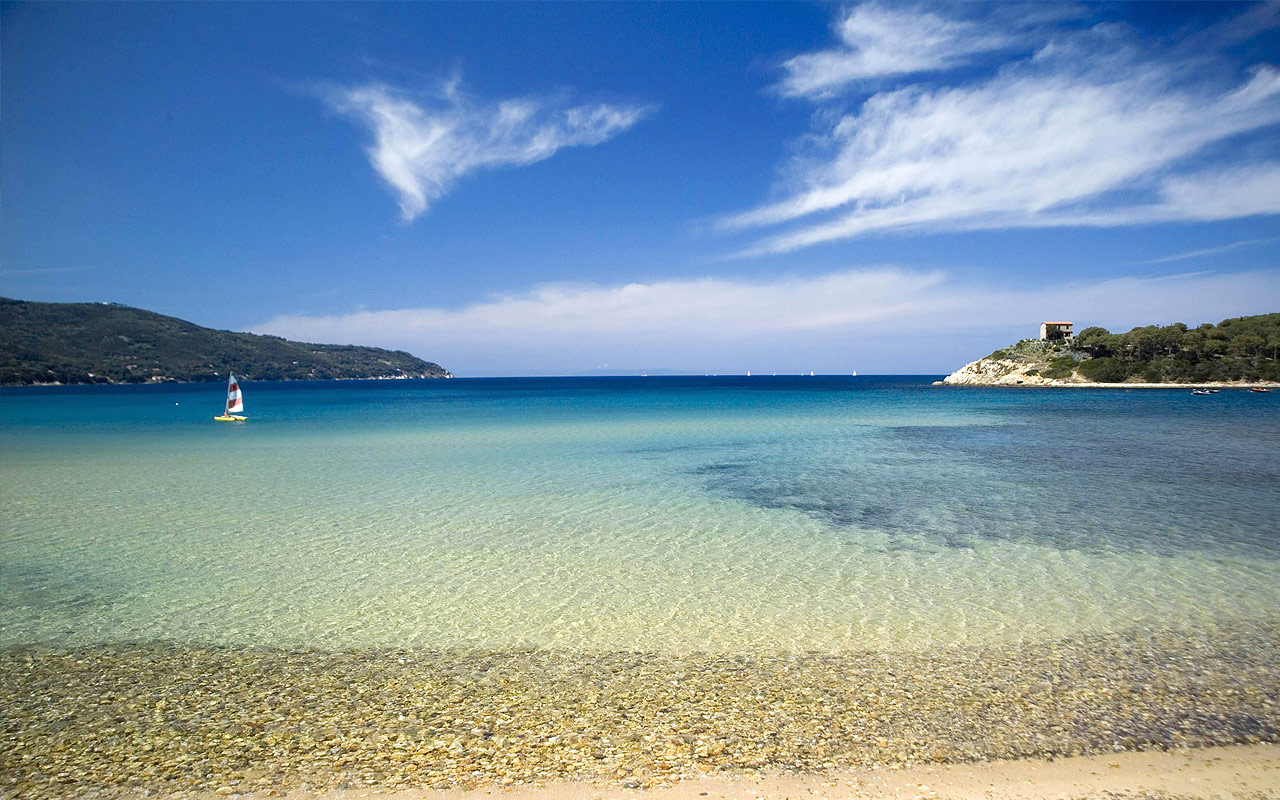 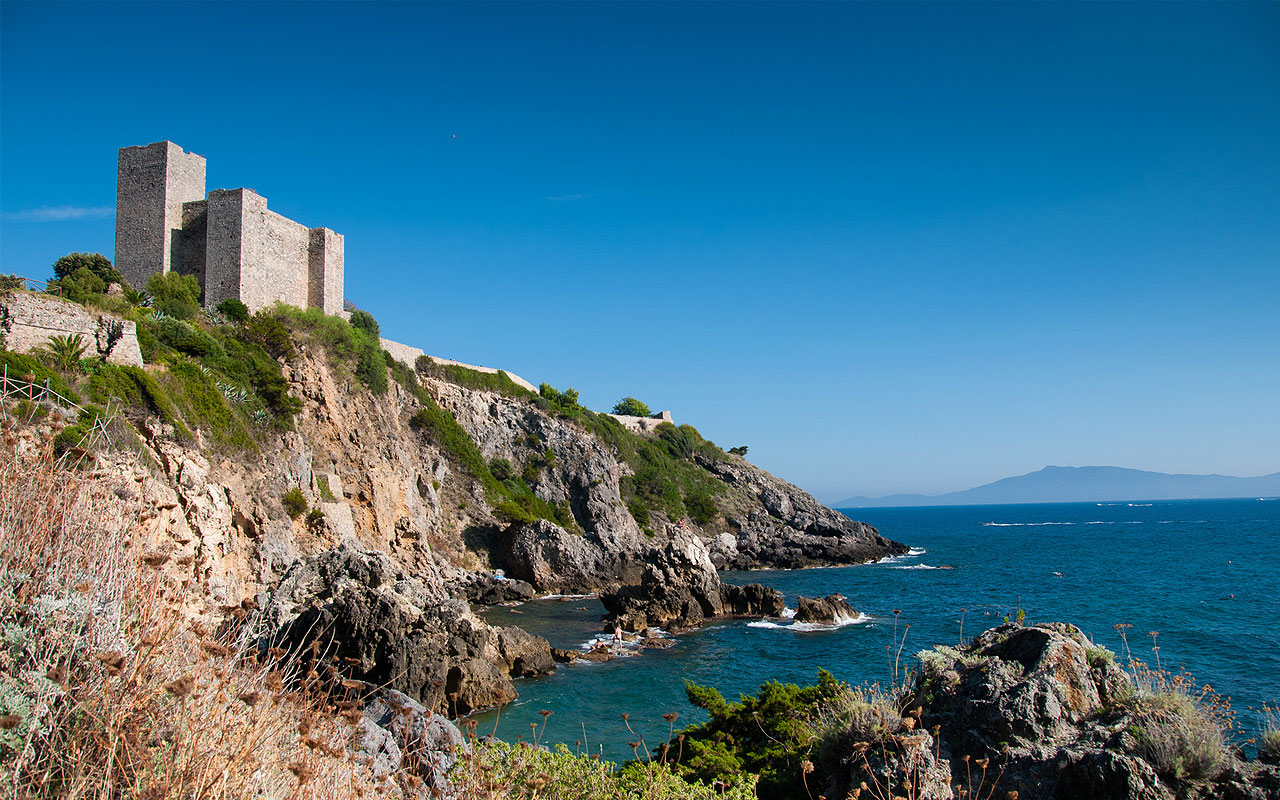 Marina di Campo – Isola del Giglio (Porto)
Let’s leave for Giglio Island, a paradise waiting to be discovered! Let’s take a close look at the sea: we might encounter schools of dolphins, sperm whales or minke whales. The entire coast of the island is jagged with numerous rocks interspersed with coves and bays and the Beach of Giglio Campese. Giglio Porto is the only port on the island, small and picturesque, it is also a very quaint town with colorful houses and narrow between them, forming alleys and lanes.
The island was inhabited since the Iron Age. Later it was perhaps an Etruscan military base and even under Roman rule was a base of a discrete importance in the Tyrrhenian Sea cited, for example, by Julius Caesar in “De bello Gallico”. At the edge of the town of Giglio Porto, slightly below sea level, are the remains of the beautiful Roman villa that includes a pool in the sea, perimeter walls, remains of mosaics, frescoes, starry terrace, structures along the sea with a series of arches and a long hanging terrace; the whole area is called “I Castellari”. In later times was ruled by various noble families of central Italy and from 1264 by the Pisan government, which then had to surrender it to the Medici. In the Middle Ages it passed under the dominion of the family Aldobrandeschi, subsequently to the commune of Perugia. In 1544 the pirate called Barbarossa sacked the island, killed anyone who opposed and deported, as slaves, more than 700 gigliesi. Following this bloody raid, the Medici family repopulated the island with people from the Sienese lands.
Not to be missed: the beautiful sea, fantastic for diving with mask and fins to discover the magical underwater world.

Isola del Giglio (Porto) – Talamone
Let’s venture in the direction of Talamone! Talamone rises on a rocky promontory dotted with Mediterranean scrub, sandy beaches and dense pine forests. Its coves are very characteristic and the seabed is excellent for snorkeling lovers.
Ancient and flourishing city already in Etruscan times, in 225 B.C. saw on its territory a decisive battle between the Romans and the Celts who were heading towards Rome. Since the most remote ages it is known from the etruscans as Tlamun, from the latins as Talamo-Talamonis, from the greeks as Telamon. In the Middle Ages became a feud of Aldobrandeschi, who erected the fortress that still stands out from the promontory and dominates the town and a long stretch of coastline. In 1559 it was ceded to Spain and became part of the State of the Presidi. The port of the town was a stage of the expedition to Egypt of Admiral Horatio Nelson, who left in 1798 from Toulon to Naples, stopping at “la rade de Tagliamon sur les côtes de Toscane” as Napoleon himself wrote in his Memoirs. The name of the city is certainly linked to Giuseppe Garibaldi and his Thousand that in 1860, the year in which Talamone was annexed to the Kingdom of Sardinia, they stopped there to stock up on water and weapons.

Talamone – Marina di Scarlino
Stage: Le Formiche di Grosseto
We return to Marina di Scarlino after this vacation of sailing, sun and sea. We make a stop at the Formiche di Grosseto, for the last bath. The three islets, thanks to their distance from the coast, are true natural paradises and will be perfect to greet the blue sea of the Tuscan Archipelago.