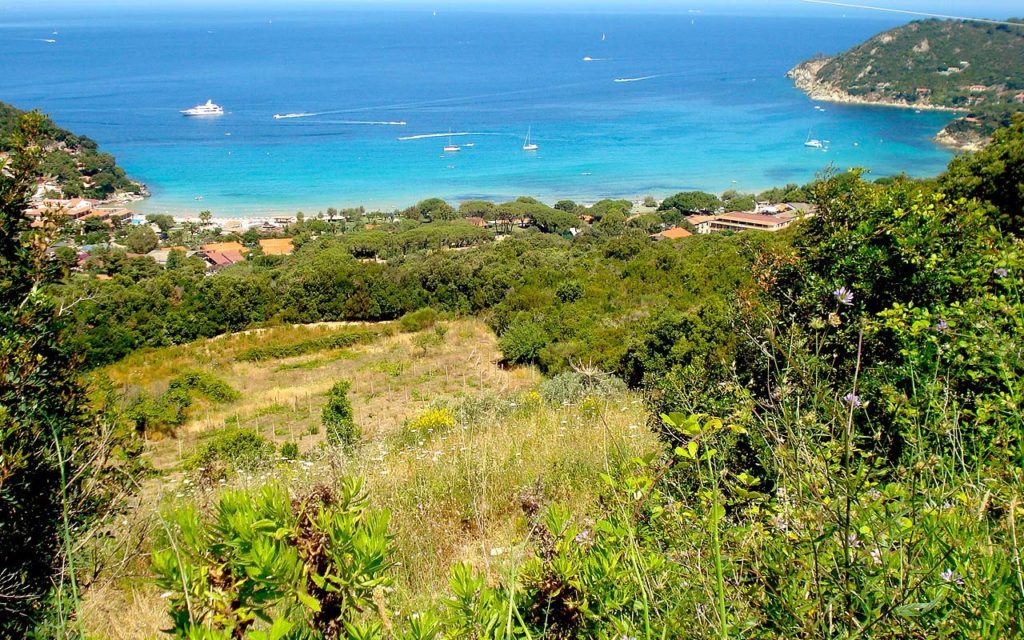 The Sun Odyssey 319 is a perfect family cruiser. Hyper-equipped, this comfortable and compact sailboat allows you to sail with great ease, as all Sun Odysseys do. The secure cockpit and standard rudder make it a perfect family cruiser. Inside it features 2 enclosed cabins, fully equipped galley, shower stall and toilet. This small sailboat is filled with natural light thanks to the continuous windows, hull portholes and the beautiful opening under the beam. 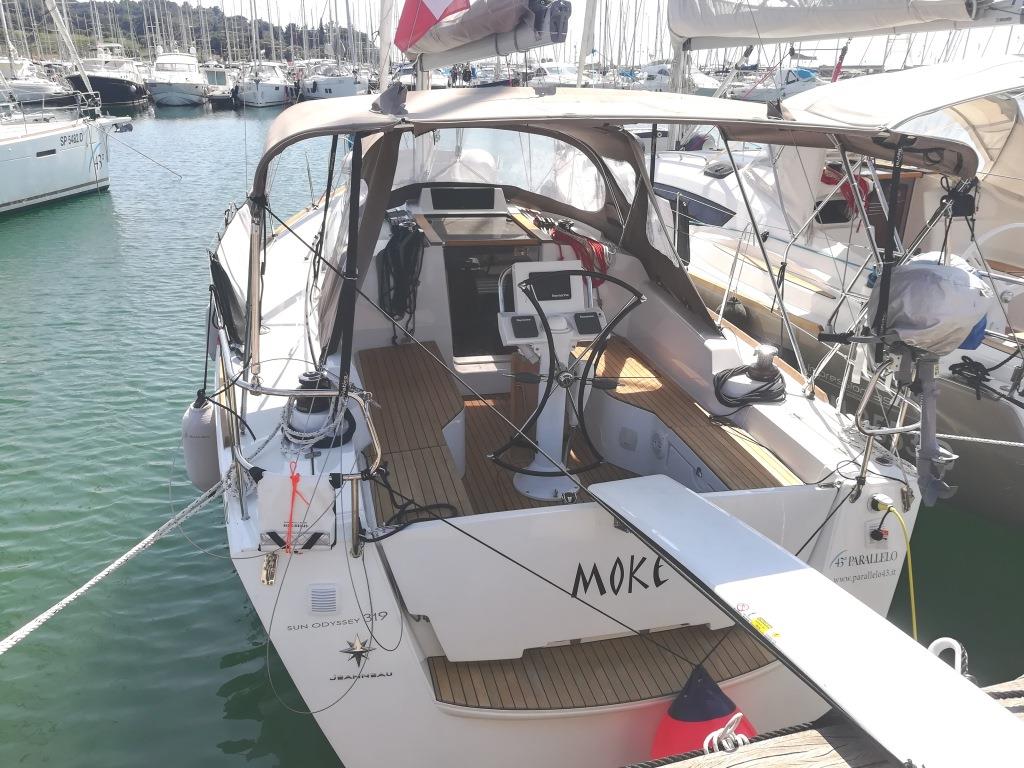 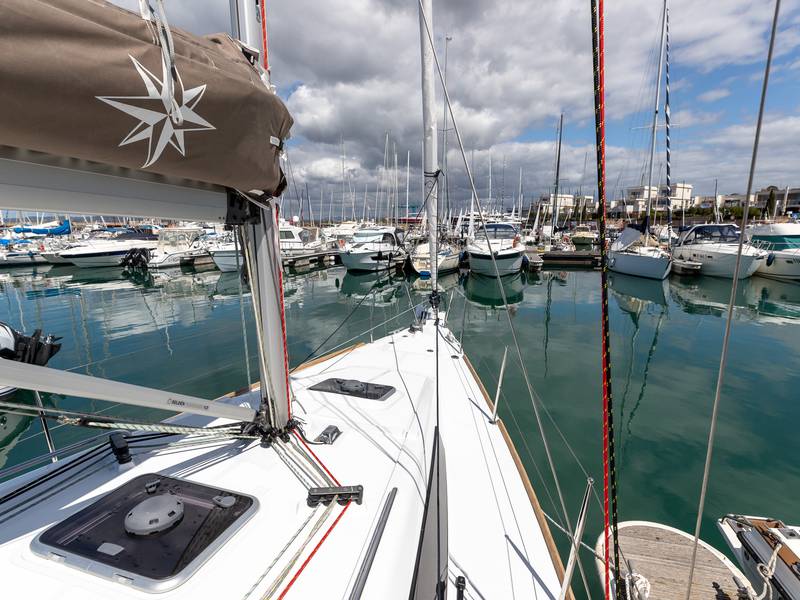 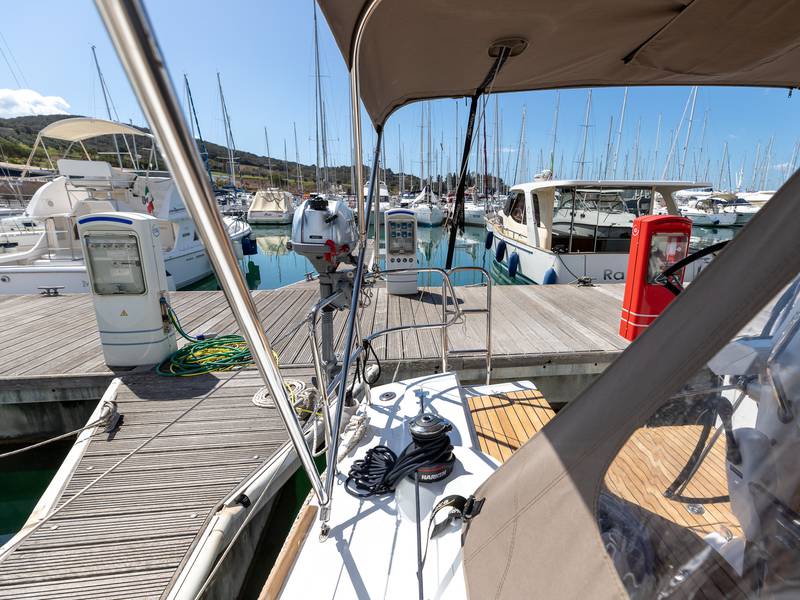 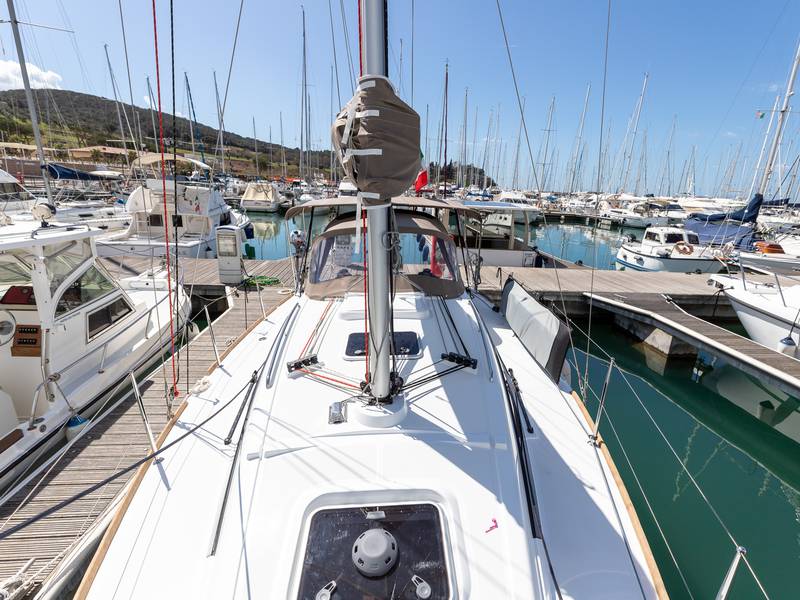 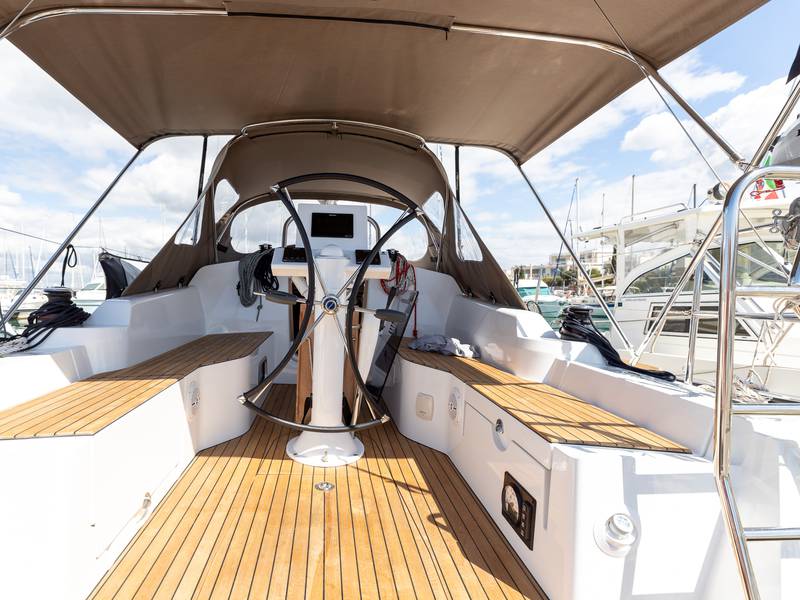 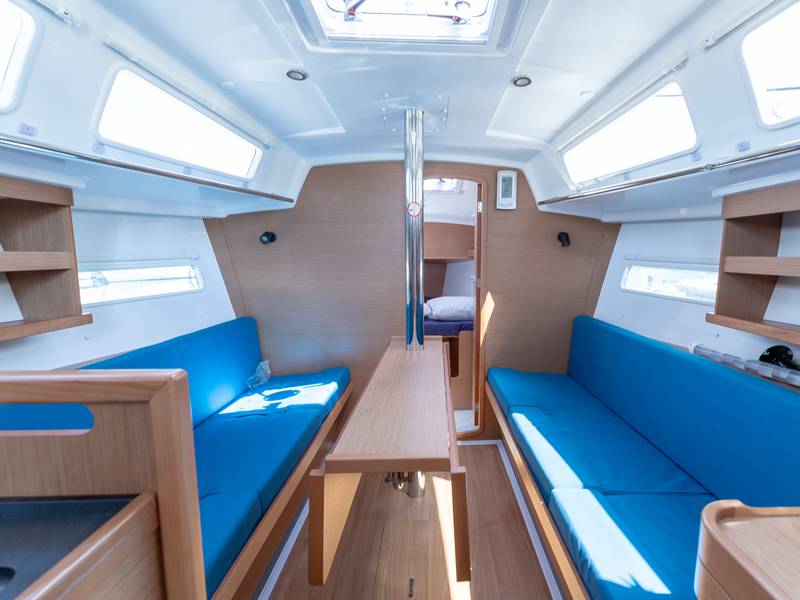 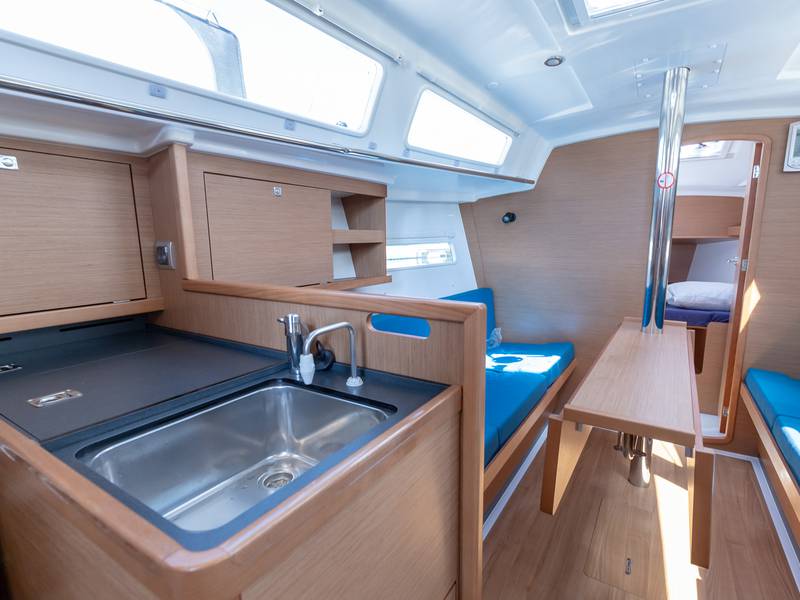 Save to Favorites
Report Abuse

Marina di Scarlino – Portoferraio
Stage: Cerboli
We set sail early for this stretch of navigation that will take us to Portoferraio, the most populated center of the Island of Elba, the small “capital” that assumed a role of international importance with the exile of Napoleon.
A small detour for a swim in Cerboli is a must. The crystal clear blue sea will make us immediately breathe vacation air.
Arriving in Portoferraio, we can moor in the ancient landing place frequented, in the past, by Etruscans, Greeks and Romans, the “Darsena Medicea”, or at the moorings of the Shipyard “Esaom Cesa”. There is always the possibility of anchoring in the roadstead. Behind the port “Darsena Medicea” lives Portoferraio and its historic center, with its beautiful views and cheerful and dynamic atmosphere, bars and characteristic restaurants, stores and boutiques.
Portoferraio was founded in 1548 at the behest of Cosimo I, Grand Duke of Tuscany, from which the city took its first name (Cosmopoli), conceived as a military district to defend the coasts of the Grand Duchy and the island of Elba. The city, Tuscan exclave in the Principality of Piombino, at the beginning was little more than a set of fortifications. Today the three forts can still be visited and are well preserved: Forte Stella, Forte Falcone and Linguella; the beautiful city walls, whose remains are in good condition and made habitable, surround the historic center of Portoferraio. Still largely visible is the imposing curtain of ramparts that rises from the roadstead to the Forte del Falcone. It remained under the control of the Grand Duchy of Tuscany until the eighteenth century when the island, because of its strategic position, was at the center of a war between France, Austria and England. In April 1814, the island was entrusted to Napoleon Bonaparte as the seat of his first exile. The French emperor chose Portoferraio as the capital of the island and in the city are still present and visitable the two villas that were his residence, that of San Martino and the Villa dei Mulini. It was thanks to the reign of Napoleon, that Portoferraio grew in importance and modernity exponentially, as the whole island, thanks to the infrastructure created and the development of iron mines of Rio Marina. In this period Portoferraio became the port used for the transport of iron from the mines of Elba to the continent, and from this comes the current name. Subsequently, the town of Elba Island returned under the dominion of the Grand Duchy of Tuscany until the unification of Italy in 1860. Later, Portoferraio experienced an economically stable period, as the whole island, thanks to its mines, until the seventies, when the iron industry went into crisis. The mines were quickly dismantled but Portoferraio, thanks to its beaches, was able to open up to the tourism industry, which still represents the main source of wealth.
Not to be missed: the wonderful panorama from the lighthouse of Forte Stella. All around the Island of Elba with its sea and the Tuscan Archipelago National Park.

Portoferraio – Marciana Marina
Stage: La Biodola
After a nice breakfast we go for a swim in La Biodola, one of the most famous and visited beaches of Elba Island thanks to its colors ranging from green of the Mediterranean to the blue of the sea. Sailing enthusiasts go there because the homonymous gulf protects it very well.
With the Mistral, however, you must be careful! You can spend the night in Marciana Marina, one of the most characteristic villages of Elba, thanks to the historical center and the promenade that preserve the typical features of the Tuscan coastal villages of the nineteenth century. In addition, the beach is very close to the port and the village.
At the entrance of the port of Marciana Marina you can see the ancient Tower of Appiani, attributable to the second half of the sixteenth century. The first nucleus of the town, called Marina di Marciana, developed in the area called “Il Cotone” (term deriving from the Latin cos – cotis “big rock”), near a natural harbour. Its small inlet also offered mooring and shelter to fishing boats. During the 18th century, due to its port and commercial importance, Marciana Marina was called “Little Marseille”.

Marciana Marina – Isola di Capraia
Route to Capraia! True pearl of the Mediterranean, rocky and volcanic, it seems lonely and far away but it becomes a must for lovers of sailing and the sea. Capraia is very exposed to the libeccio, scirocco and maestrale winds: it is better to moor in the small port of the island or take advantage of the buoys in the roadstead. It is a perfect oasis for those who love snorkeling, scuba diving and swimming alone. The wild beauty of its seabed, coastline and marine environment will fascinate you.
Formerly called “Aigylion” by the Greeks and then “Capraria” by the Romans, its name derives from the presence of wild goats on the island, but according to another hypothesis it could derive from “karpa” with the meaning of “rock”. In 1055 it was conquered by the Saracen pirates, then it was dominated by the Pisans and passed definitively under the orbit of Genoa after the battle of Meloria, which placed there the lordship of Jacopo de Mari in 1430. From 1540 was built by the Genoese the fortress of San Giorgio and the three towers of sighting Torre del Porto (1541), Torre dello Zenobito (1545) and Torre delle Barbici (1699) to be able to see the ships of the pirates and limit in this way the piracy. After the annexation of the former Republic of Genoa to the Kingdom of Sardinia, with the Congress of Vienna in 1814 and the proclamation of the Kingdom of Italy, Capraia was part of the province of Genoa until 1925, when it passed to the province of Livorno. From 1873 to 1986 it was also the seat of a penal colony. 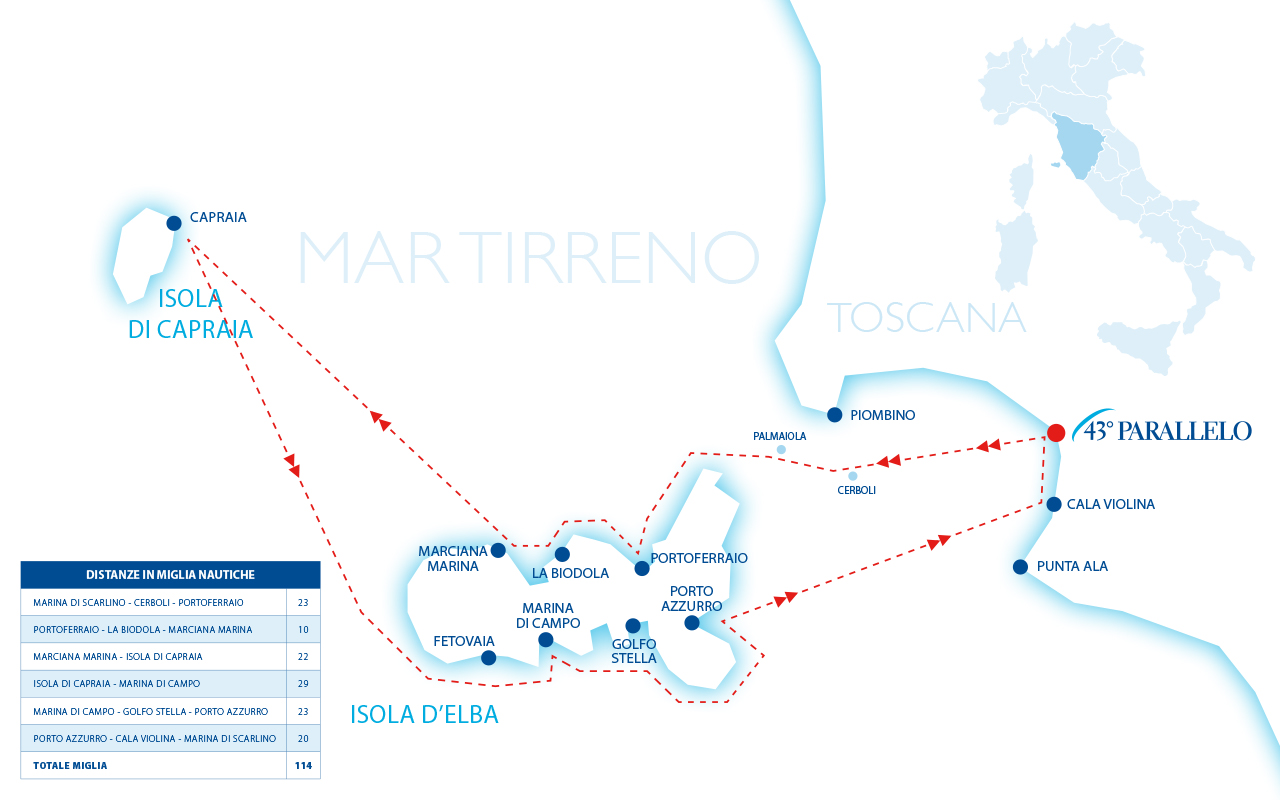 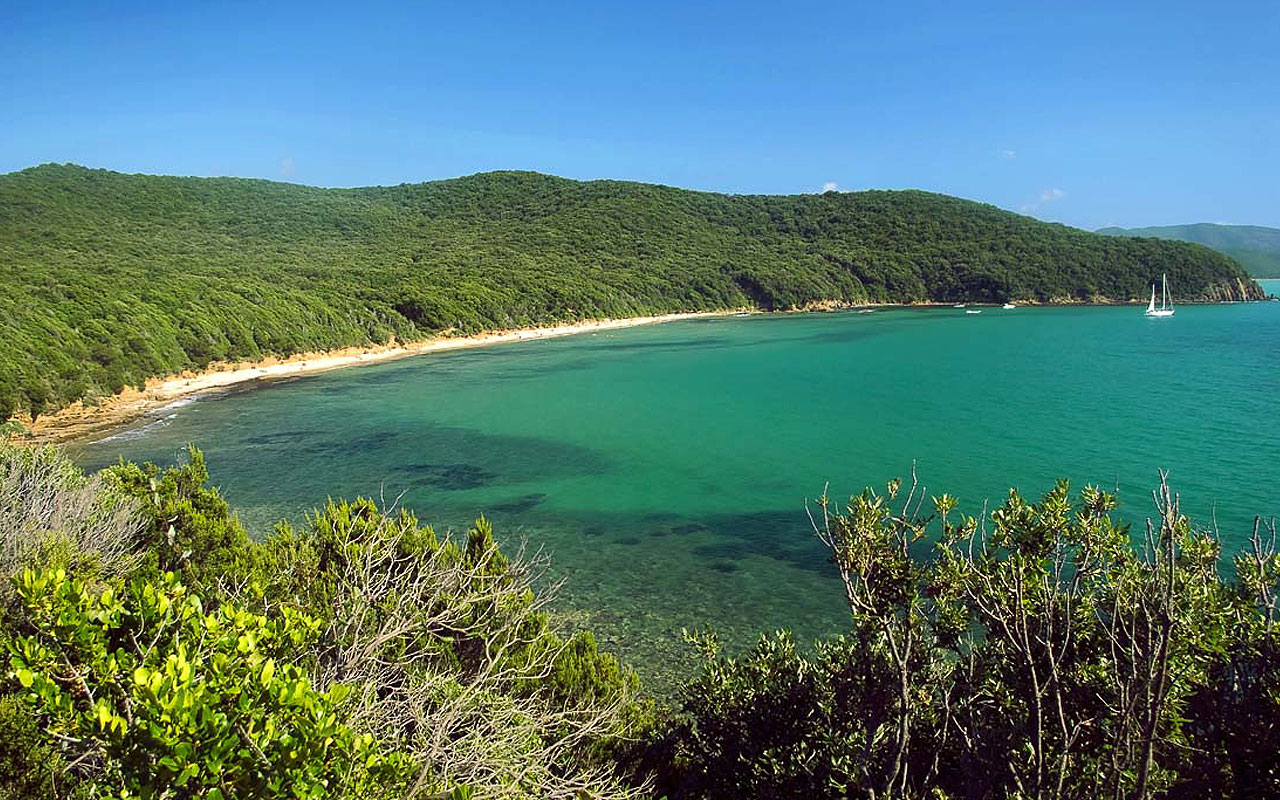 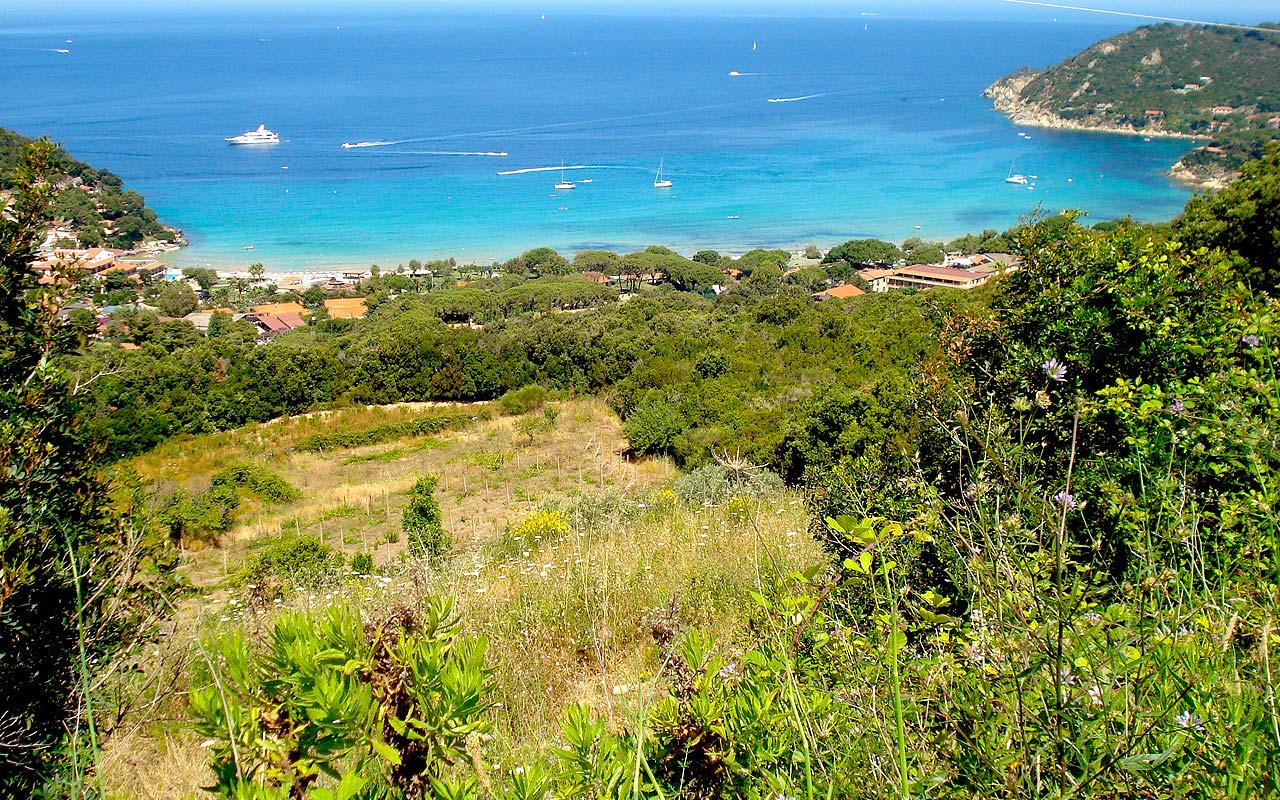 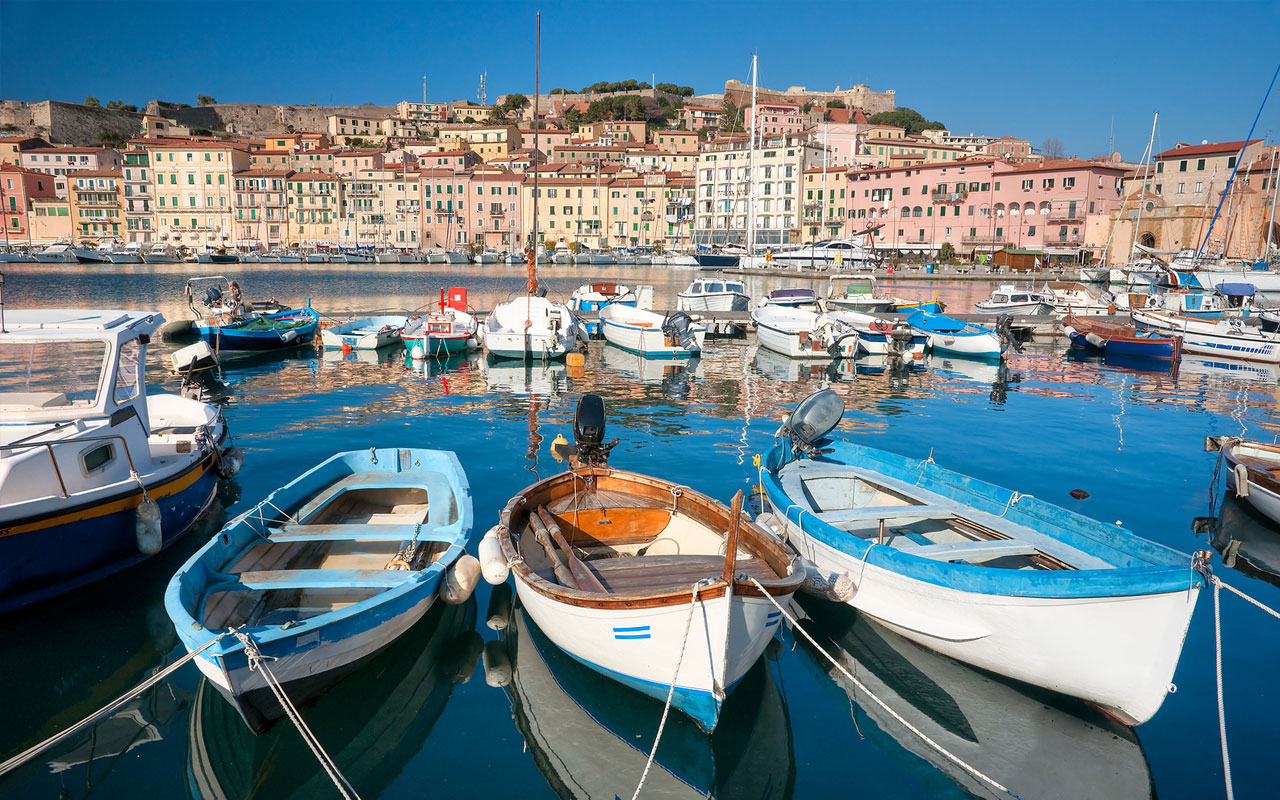 Isola di Capraia – Marina di Campo
Let’s go back to the Island of Elba and stop in Marina di Campo, one of the most fascinating bays: approaching the large roadstead we can enjoy some nice edges with flat sea… for real sailors. Beware of south winds: it is better to stay in the roadstead. The pier, in fact, is often insufficient and it is difficult to moor with the sirocco.
The beach of Marina di Campo is perfect for those who do not want to give up any comfort. It is in fact located in the town center and borders the port, which does not create any problem. Behind the beach there is a pine forest that provides relaxing areas of shade.
Marina di Campo is a small fraction of the municipality of Campo dell’Elba. During the Middle Ages, it was annexed to the Republic of Pisa. The present town of Marina di Campo rose during the following centuries near the plain anciently called, for its peculiarity of wetland, Maremma of Elba. The municipal territory also includes the Island of Pianosa and in the westernmost part extends the Costa del Sole, which includes some of the most famous and popular places on the island.
Not to be missed: the evocative colors of the beach and the village of Marina di Campo. A lunch or even better a dinner in one of the many typical restaurants … the food will make you lose your head!

Marina di Campo – Porto Azzurro
Stage: Golfo Stella
We set sail for an enchanting sail to Porto Azzurro, but we make a stop at Golfo Stella where the pristine sea attracts us for a dip.
Porto Azzurro is a lively and welcoming town of clear Spanish origin, founded in 1603 by Philip III of Spain and is situated at the foot of a promontory in the wide inlet of the east coast of the island. On the advice of the Genoese admiral Andrea Doria, the Spanish erected a fort on the promontory which closes the inlet to the east.
Together with Forte Focardo, on the other side of the gulf, it constituted the defensive system of the gulf of Mola, base of the fleet of the Spanish king Filippo III. This defensive structure aimed to stop the military rise of the Grand Duchy of Tuscany, which with the fortification of Portoferraio had a strategic stronghold in the Tyrrhenian Sea, which could seriously endanger the Spanish interests in this part of the Mediterranean. In 1714, Porto Azzurro was annexed to the kingdom of Naples, to which it remained until 1801, when it was ceded to the French who had occupied all of Tuscany. In 1815, after the fall of Napoleon, Porto Azzurro was then annexed to the Grand Duchy of Tuscany until the Unification of Italy. In the eighteenth and nineteenth centuries, along with Portoferraio and Marciana Marina, was the largest center of fishermen on the island of Elba, encouraging immigration. In the surrounding area there is, alongside the seaside tourism, an important agricultural activity (especially fruit and wine growing).
The beautiful Piazza Matteotti looks like a living room on the sea and is in fact the main meeting point of the Portoazzurrini. During the summer season, numerous musical, cultural and historical shows are organized.
Porto Azzurro is only 18 miles from Marina di Scarlino and is therefore the best place to spend the last night. The port is often very crowded in summer. In this case we can stay in the roadstead in front of Porto Azzurro, or move to Golfo di Mola.

Porto Azzurro – Marina di Scarlino
Stage: Cala Violina
Let’s leave the moorings towards Marina di Scarlino! Before returning to port, let’s stop for a last swim in Cala Violina, a beautiful cove that will welcome us by making us listen to the sound of its sand underfoot.
The sea, the wind and the sailing of this vacation will remain impressed among our most beautiful memories.