On this island is “Anse Source d’Argent,” the most photographed beach in the world. Welcoming tourists is soft white sand and an expanse of shallow, blue water protected by a coral reef that makes the beach ideal for children. To gain access to this little paradise on earth, much loved by photographers and filmmakers, one must enter the Union Estate, a property where the oven (‘kalorifer’) for making copra and the mill for extracting coconut oil are still standing. We recommend a walk around the majestic manor house, framed by giant granite boulders, and a hike to observe giant tortoises up close. The cemetery of the island’s early inhabitants and some typical crops, such as vanilla, are also located on the property. The vanilla plantation still grows in long rows of espalier. Spices, on the other hand, are the basis of Seychelles Creole cuisine, and the ways in which they are used reflect the melting pot of cultures that reside in the islands. Vanilla, cinnamon, nutmeg, pepper, chili, ginger, and many other spices flavor foods by offering unforgettable flavors.

On La Digue Island, where time seems to stand still, trekking and bicycling are also practiced, and the various trails available, in addition to 360-degree panoramic views and giant turtles, showcase an old colonial plantation, the first cemetery of early French settlers, and a large colonial house. The fourth largest island in the Seychelles is an enchanted place where the preservation of traditions and culture make it a unique place to travel back in time. The warm atmosphere of this intimate and peaceful island, its traditional architecture, its jaw-dropping beaches, such as the legendary Anse Source d’Argent, counted among the most celebrated beaches in the Seychelles and even the world, its sculpted granite cliffs and impressive white sands make it an absolute must for travelers. Its picturesque satellite islands are ideal for excursions with fins, mask and snorkel or diving with an oxygen tank. It is equally an ideal springboard for discovering the nearby islands of Petite and Grande Soeurs, Coco and Marianne. Intrigued by the French navigator Lazare Picault at the time of his discovery of the Seychelles in 1742, La Digue owes its name to one of the vessels in explorer Marion Dufresne’s fleet, commanded by Jean Duchemin of St Malo, who was sent from France by order of César Gabriel de Choiseul Praslin to explore the granitic islands of the Seychelles in 1768 with the East India Company. La Digue, about 40 km from Mahè, is a place where time seems to stand still and where traditions play an important role: bicycles and oxcarts (ox cabs) are the main means of transportation, and efforts are made to preserve traditional, quiet customs, architecture and lifestyle. There are examples of traditional architecture and colonial houses in the regions of Grand Anse, L’Union Estate, Anse Réunion and La Passe. Traditional methods of boat building or refining coconut products (copra) are still practiced here. The environment and meeting the people of La Digue, who have a very strong identity, will only be an added benefit to discovering peaceful living and a moment of true sharing. 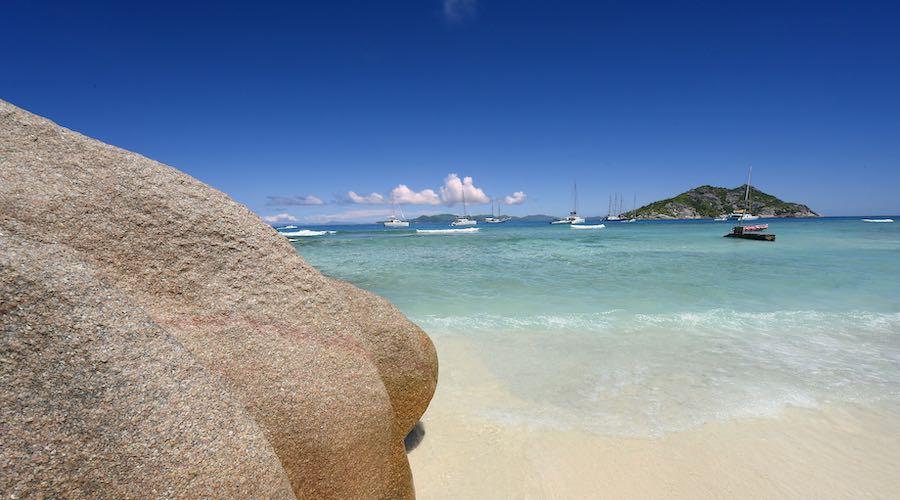 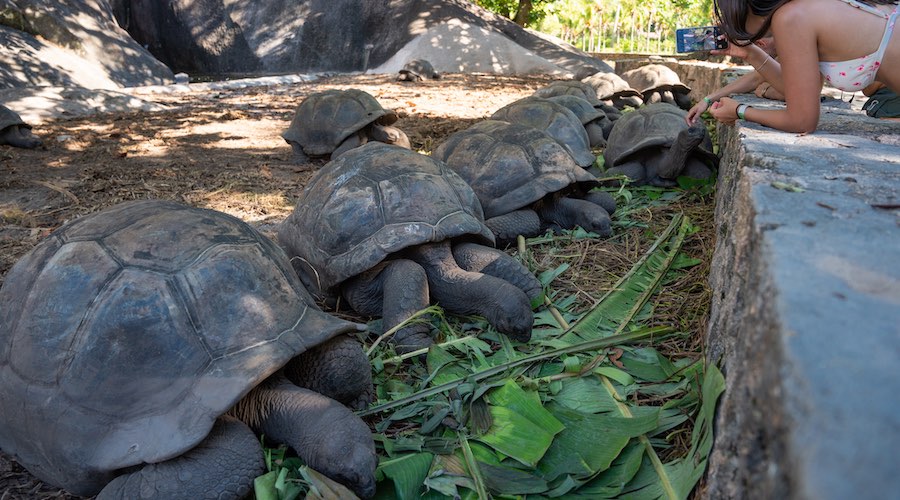 The distant beaches of Grande Anse, Petite Anse, and Anse Cocos are among the most beautiful places in the world, as well as among the most romantic. They are the subject of walks, bicycle or oxcart rides, if access permits, and promise wonders. An idyllic retreat, on La Digue, Anse Cocos is located on the east coast of the small island and is accessible only by a 30-minute hike. Less well-known than the much-photographed Anse Source D’Argent, with which it shares similar features, picturesque Anse Cocos is all the more popular because it is intimate and secluded, which is its whole charm. The white sandy beach, natural pools and tree shade make Anse Cocos a perfect destination for a day trip. It takes about 30 to 40 minutes to walk to the wonderful Anse Cocos, starting from Grand Anse and going through Petite Anse. It can also be reached by passing north from Anse Fourmis. The nearest restaurant/bar and bathrooms are located in Grand Anse. It is a perfect destination for anyone who enjoys walking and does not just want to sit on the beach and sunbathe. Anse Cocos hosted the first settlements on La Digue. At one time there was also a large copra plantation, whose now abandoned buildings and old ovens, where coconuts were dried, can still be seen. These remnants and the dreamy landscape make this beach popular with photographers. There are also countless activities to be enjoyed in the heart of La Digue where there are excellent sites for diving with fins, mask and snorkel at Anse Réunion; Anse Banane, Anse Grosse Roche and Anse Fourmis, on the other hand, are ideal for exploring via small bike trails, as are the well-preserved colonial houses such as Maison Eustache Sarde at Anse Réunion. This mainly wooden building is one of the only remaining examples, of its kind, in the Seychelles. Dated to the early 20th century, this house was built with almost geometric precision. Once supported by large masonry pillars, it now rests on a habitable concrete subsoil. It possesses a veranda on the facade, adorned with mansards with ornamental wooden balustrades, comprising a rooftop with attic living space. The design was designed to allow normal ventilation. For bird watchers, the Special Bird Reserve “Widow,” is the perfect place because it is favored by the Black Flycatcher of Paradis, one of the rarest birds in the world, as well as the Seychelles Bulbul, Seychelles Nectarine, and extremely rare freshwater turtles (the yellow-finned, star-bellied freshwater turtles). For photography enthusiasts and incurable romantics, Mont Belle-Vue and the Nid D’aigle peak, which culminates at 333 meters above sea level, are the ideal place to admire a grandiose panorama of the surrounding satellite islands; this climb allows you to discover the biodiversity of the forested hills.

In fact, for the more adventurous and experienced climbers, there are also the rocks of La Digue, which, however, are best tackled with the support of local sports associations to avoid facing walls that are treacherous and dangerous to climb. La Digue has a much more relaxed atmosphere than the main islands, partly because there are few paved roads and very few cars, many bicycles and ox-drawn carts. It is the ideal destination for those seeking direct contact with nature, it is possible, in fact, to find deserted bays in which it seems as if you really ended up in paradise. You can choose from 35 dive sites, the most recommended are those just off the coast, among the many you cannot miss a diving excursion to Coco Island, a nature reserve that perfectly embodies the archetypal tropical dream island, here you can both snorkel and scuba dive in both cases you will be fascinated by the groups of butterfly fish that inhabit this environment. The Marianne site is no different; it has a maximum depth of 25 m and the submerged walls have created a kind of cathedral that has become a shelter for at least 3 different species of shark that can be encountered in a single dive. Another site not to be missed is Whale Rock, a rock located just a few meters below sea level that is a favorite site for divers thanks to an impressive 10-meter-long tunnel traversed by several openings leading to the outer reef. The archipelago has an abundance of diving centers where, in addition to tours of dive sites, day courses for all degrees of experience are available, including for those who want to begin approaching diving. In the diving centers, you can also rent all the necessary equipment. Diving in the Seychelles is a dream to be lived intensely, the triumph of colors and fish of the most diverse species make the blue ocean a magical place capable of bewitching anyone who dives there.