Lowrance, a leader in fishing electronics for more than 60 years, brings you a new suite of sonar technologies and navigation tools that enhance fishfinder/chartplotter functionality to new heights.

Fishing at sea becomes easy, effective and fun. Just have on board one of the Lowrance instruments dedicated to fishfinding, such as the Active Target, the Elite Fs or the Hook Reveal to monitor in real time the seabed below the boat and identify the prey. 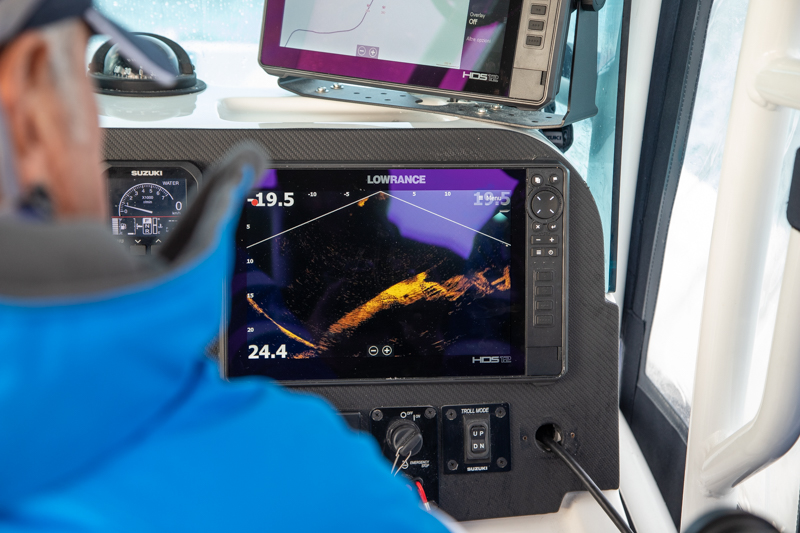 ActiveTarget Live Sonar displays show high-resolution images of fish movements in real time and detail. With this instant feedback, anglers are able to instantly adjust their casting on present fish based on the live information they receive from the probe. 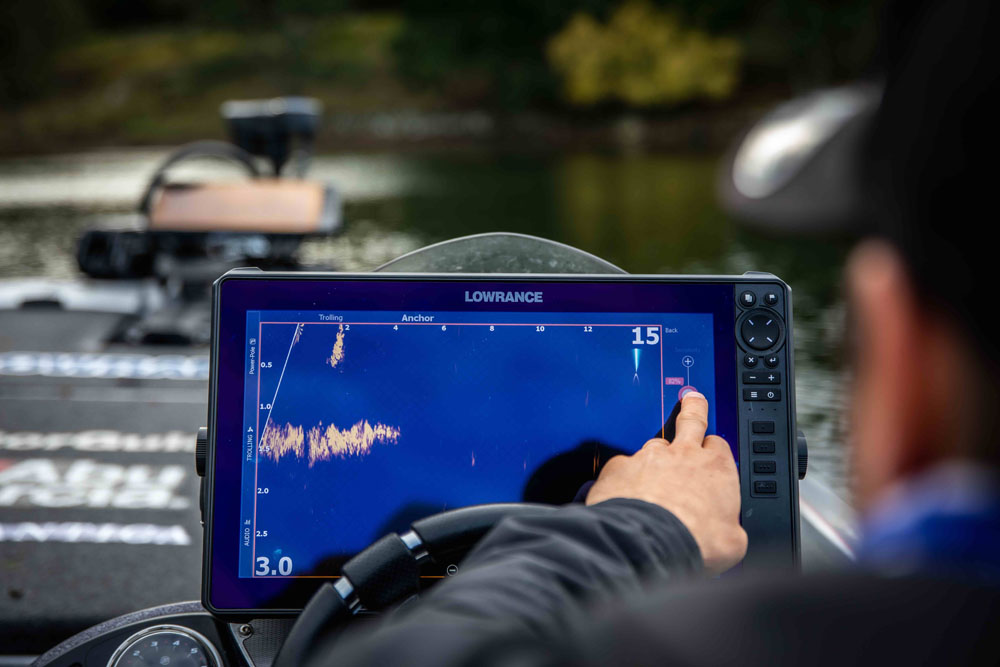 Getting fish to bite is even easier

Take advantage of high-resolution images of fish swimming around your structure and reacting to your bait, in real time, with the new ActiveTarget™ Live Sonar. In addition to Forward, Down or Scouting views, you can sound out the location of fish around the boat and easily monitor their movements. Find out how fish interact with structure and react to bait, so you can adjust your fishing action and get them to bite. Get on board!

The strengths of Active Target™ Live are: 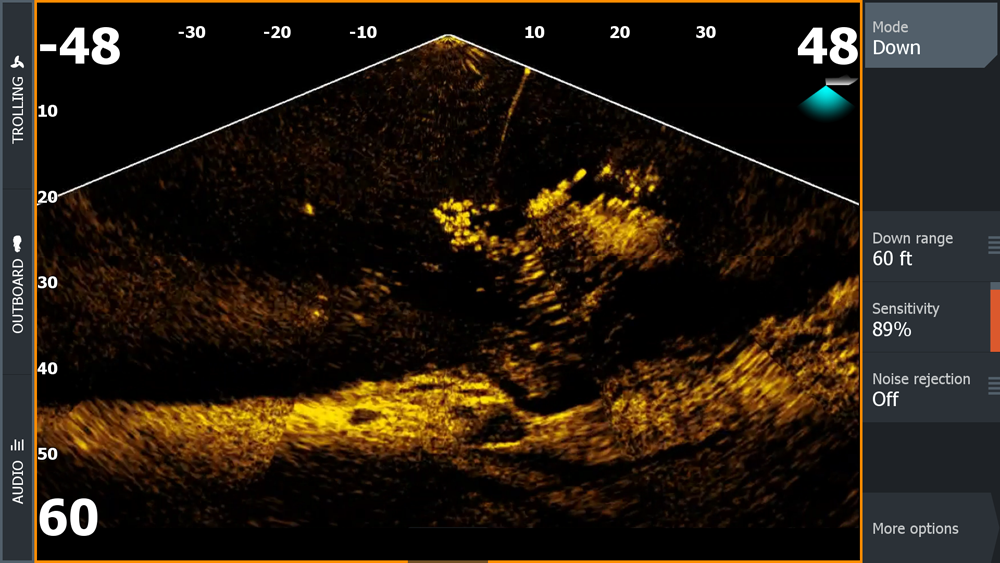 With three viewing options, ActiveTarget can be set to Forward, Down or Scout™ modes. Forward and Down views allow you to detect the presence of fish in front of or below the live sonar transducer, and Scout mode provides an ultra-wide, top-down view of fish structure and activity in front of the transducer – ideal for finding schools of fish. 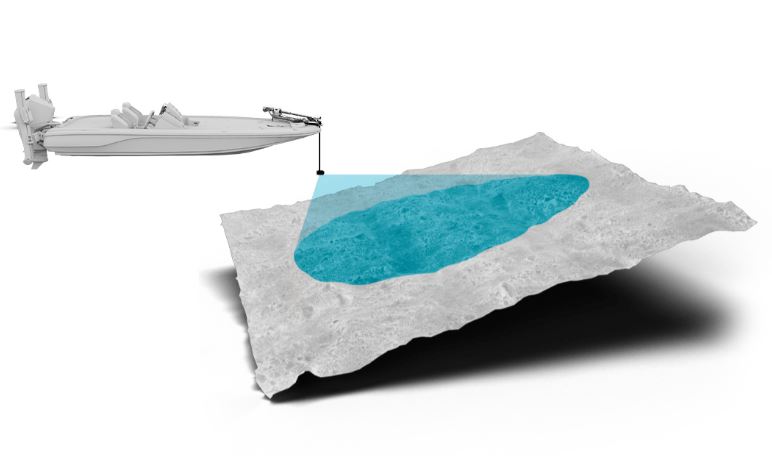 The ActiveTarget live sonar includes all necessary mounts for trolling motors, including mast mounts intended for Forward, Down and Scout views, motor mount for Forward and Down views, and a motor mount for Scout view. A transom mount is available as an additional accessory.

For more information on ActiveTarget: 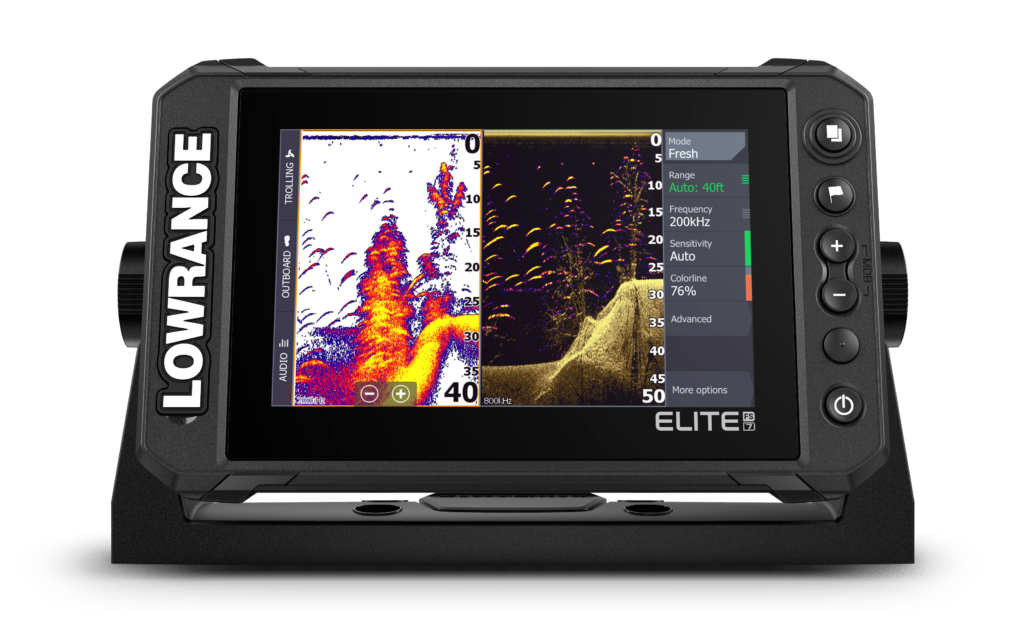 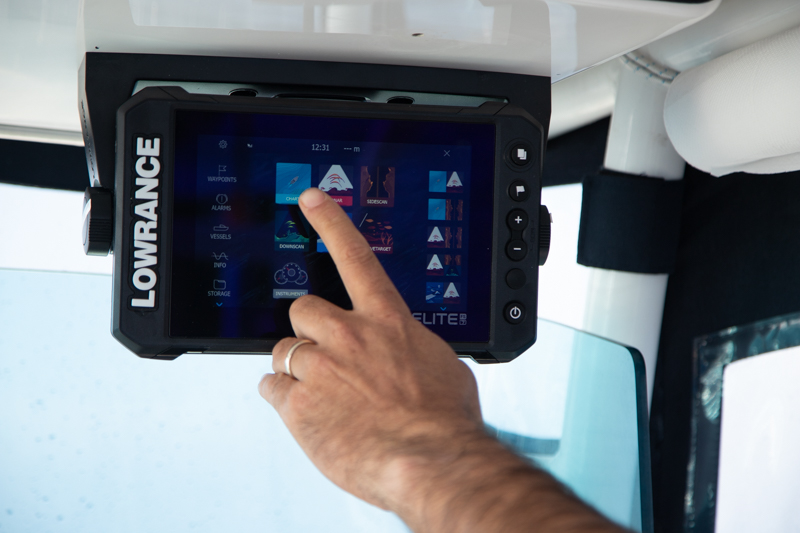 See high-resolution images of fish in motion – monitor them as they swim back and forth with ActiveTarget Live sonar. This innovative solution allows users to find out how they position themselves in structures and how they react to the arrival of a lure. With this visualization, anglers know if the technique being used is correct or if it’s time to change it – information that traditional sonar or structure imagery simply doesn’t provide. 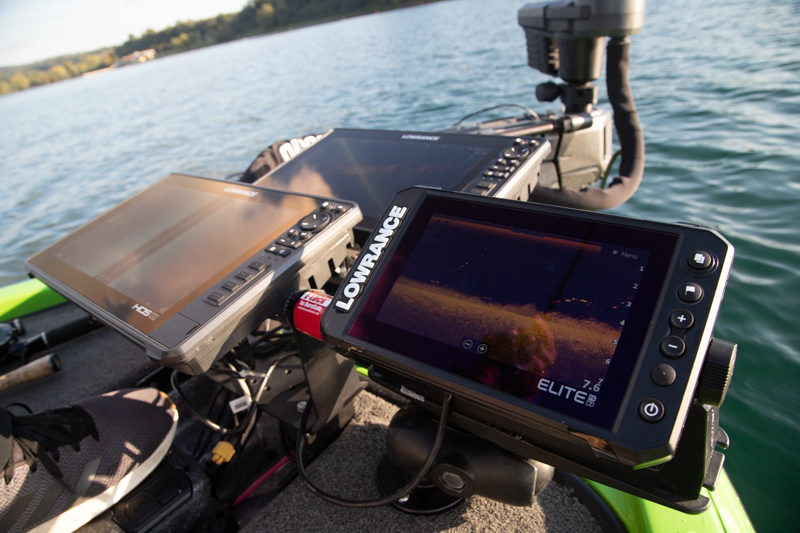 Enjoy the wide choice of maps

Optimize your worldwide basemap with a range of C-MAP charts and spend more time fishing instead of searching for fish; upgrade to Genesis Live to enjoy real-time maps as well. Also compatible with Navionics and other chart providers.

With 3-in-1 Active Imaging sonar featuring CHIRP, DownScan imaging with FishReveal™, you can see structure and covered area with a new level of detail accuracy, within a range never before achieved by other structure imaging technologies. Get the best of CHIRP sonar and DownScan Imaging technology in a single screen with FishReveal’s unique intelligent target display, which allows you to clearly distinguish fish from structure and covered area on highly detailed DownScan images. 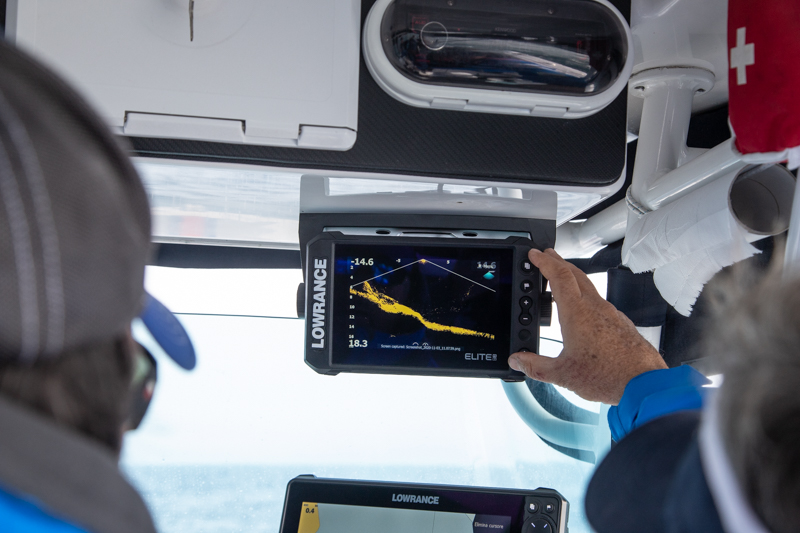 Available from authorized dealers in 7- and 9-inch displays, the new Elite FS series includes a range of model options with or without Active Imaging, as well as ActiveTarget Live Sonar transducer solutions.

For more information on Elite FS: 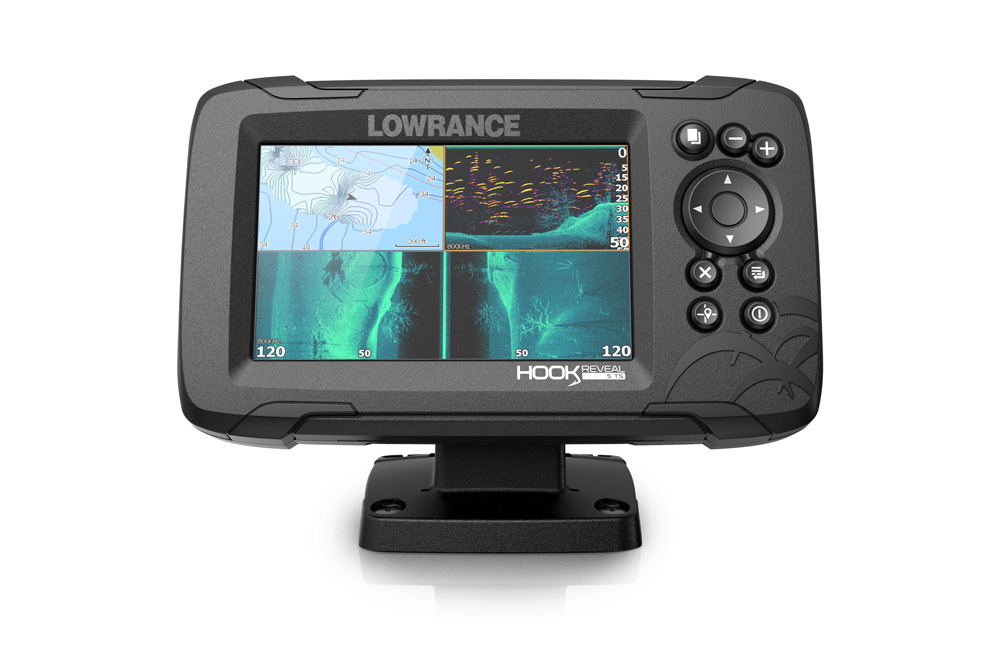 The all-new HOOK Reveal fishfinder and chartplotter makes fishing easier by delivering exceptional performance with proven fishfinding tools, including auto-tuning sonar, optimized deepwater performance, SideScan, DownScan Imaging™ and now FishReveal™, which makes it easier to see fish by combining the benefits of Lowrance CHIRP sonar and DownScan Imaging™ in a single screen. For fishing in familiar areas or unknown waters, you can discover the best fishing spots and map unknown waters in real time with Genesis Live.

Where the fish are tells you FishReveal

Genesis Live gives anglers the ability to create bathymetric maps with ½ foot intervals of the local lake or unknown waters, in real time, on the screen of HOOK Reveal displays. Genesis Live maps can be created and saved to HOOK Reveal by inserting a blank microSD card into the card slot. 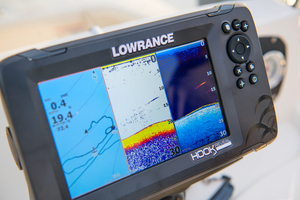 For more information on HOOK Reveal: 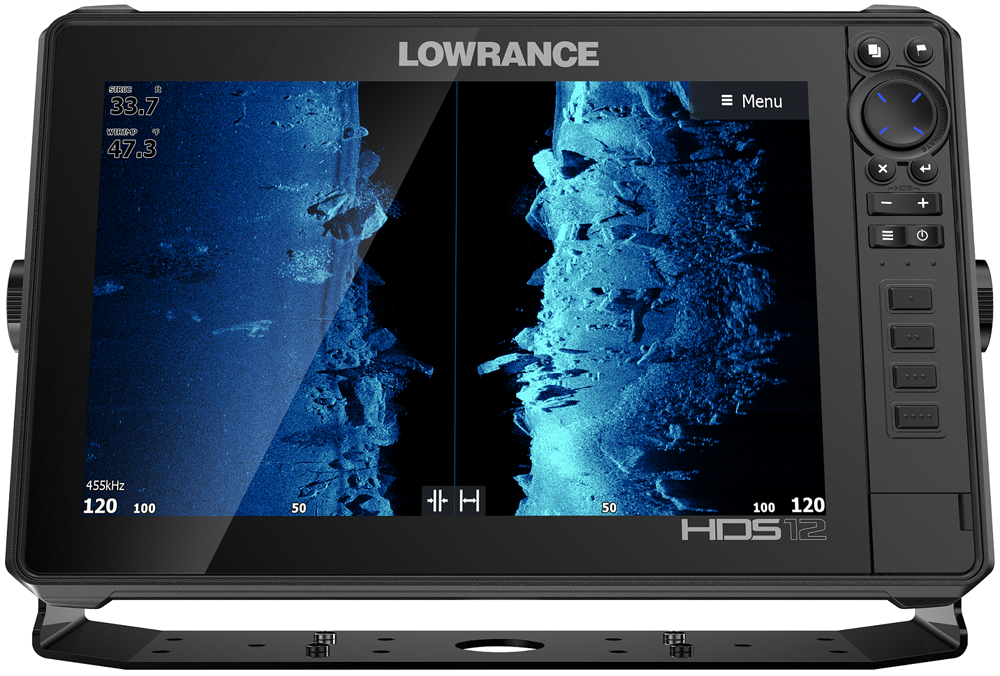 Get ready to experience a new level of fishfinding performance with HDS LIVE, which includes built-in Lowrance® CHIRP sonar, support for Active Imaging™, StructureScan® 3D with Active Imaging the new ActiveTarget™ live sonar. Featuring the best set of navigation tools ever integrated into a fishfinder/chartplotter display, HDS LIVE offers a pre-loaded world basemap, support for autorouting and the new Genesis Live on-screen cartography, which offers real-time precision charting with contours down to ½ foot.

Fishing is more focused when you know exactly what the fish are doing – in real time – with ActiveTarget™ Live sonar. Watch fish movements in high resolution, individual as they swim in and around structures. Visualize their reaction to bait in real time and you’ll know if your current technique is right or if it’s time to change it.

Ideal for detecting fishy areas such as boulder accumulations, vertical logs, algae or weed beds, pits and submerged reefs, Active Imaging™ sonar delivers superior clarity and higher resolution images of fish and structures, with a greater range than any other structure imaging technology. 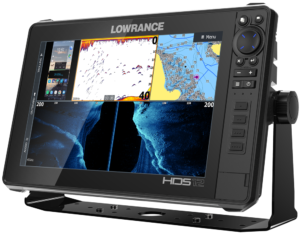 Makes it easier to visualize fish on DownScan Imaging™ by combining CHIRP sonar targets with superior high-resolution views of bottom, structure and bait details. With FishReveal, you no longer need to view CHIRP sonar and DownScan Imaging in one split screen.

With C-MAP Genesis Live, you can now update your favorite fishing spot maps, or create mapping of unmapped areas, in real time, with ½ foot contour lines, right on the fishfinder/chartplotter screen. Genesis Live uses digital depth to create high definition maps with 1/2 foot contour lines. You can pinpoint key fishing areas with Genesis Live maps, which make it easy to find the places fish like to hide, such as submerged reefs, peaks, pits and more. In addition to offering truly customizable mapping, Genesis Live provides maximum control over contour transparency and density, shading color palette for depth and safety, and more. Users can now create Genesis Live maps in real time and save them to a microSD card.

You no longer have to choose between watching a fishing trip and spending a day at sea with LiveCast™ smartphone integration. Watch video, Google Maps and fishing data on HDS LIVE’s high-resolution screen via HDMI connection on 16- and 12-inch HDS LIVE models. View data from your smartphone and keep an eye on the fish with the split screen LiveCast sonar.