The island is known for its famous Vallée de Mai, a UNESCO World Heritage Site: early explorers once they reached the coast believed they had found the Garden of Eden. The Vallée, home to six species of endemic palms and numerous exotic trees, is the last home of the unique and rare black parakeet, an endangered species. A rare and unique jewel is then the bewitchingly beautiful forest of 6,000 coco-de-mer palms: once believed to be the famous forbidden fruit on which Eve fed, since this great seed grows only on these islands.

Praslin Island – Anse Lazio: one of the 10 most beautiful beaches in the world

Then in Praslin is Anse Lazio, one of the ten most beautiful beaches in the world, framed by pink granite boulders and a crystal clear sea. Ancient granite sentinels guard both ends of the beach, a perfect expanse of soft white sand that leads to clear waters perfect for swimming and snorkeling. This beach is located in the northern part of Praslin lying along Baie Chevalier. It is a 600-meter-long strip of white sand surrounded by beautiful granite rocks with clear blue waters that take on wonderful colors in the sun. Lush green vegetation provides a backdrop and contrast to the white of the beach and the blue of the sea, giving the landscape a wild look. This beach unlike other beaches in the Seychelles is not protected by a coral reef. A must on every visitor’s list, Anse Lazio remains pleasantly relaxing and will not disappoint. Another beach not to be missed in Praslin, the superb Anse Georgette deserves the 30-minute hike through the grounds of the luxurious Constance Lemuria Resort. Alternatively, it can be reached by boat.

When you arrive at Anse Georgette, you are sure to be enchanted by the soft, light sand surrounded by lush tropical flora as well as a fantastic snorkeling area. Anse Georgette is a dream beach in northern Praslin and is considered the most beautiful on the island along with Anse Lazio. The enchanting mix of blue sea, white sand and giant palm trees forms a breathtaking landscape. It is 15 km from Grand Anse beach and Vallee de Mai Nature Reserve. Anse Georgette offers ideal conditions for swimming and snorkeling. Sometimes there are also very high waves, although the sea is mostly calm when the southeast monsoon blows (between May and November). The beach is also generally suitable for families with children, but they should never be left alone. Anse Georgette is a real postcard beach and one of the few pristine ones in Seychelles, as there are no buildings or other structures outside the golf course. It is the perfect panorama for any photographer. Another must-see destination is St. Pierre, one of the small islands that dot the bay of the Côte d’Or in Praslin, recognizable by its granite outline, dotted with elegant palm trees. Over the years it has become the hallmark of the Seychelles, appearing in numerous advertising campaigns. St. Pierre is an ideal place for swimming, snorkeling and anyone who wants to enjoy spectacular sunsets. 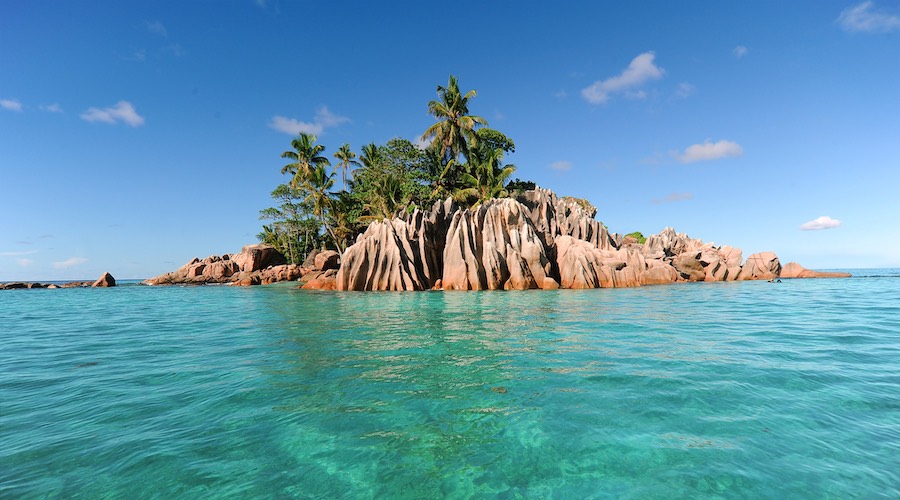 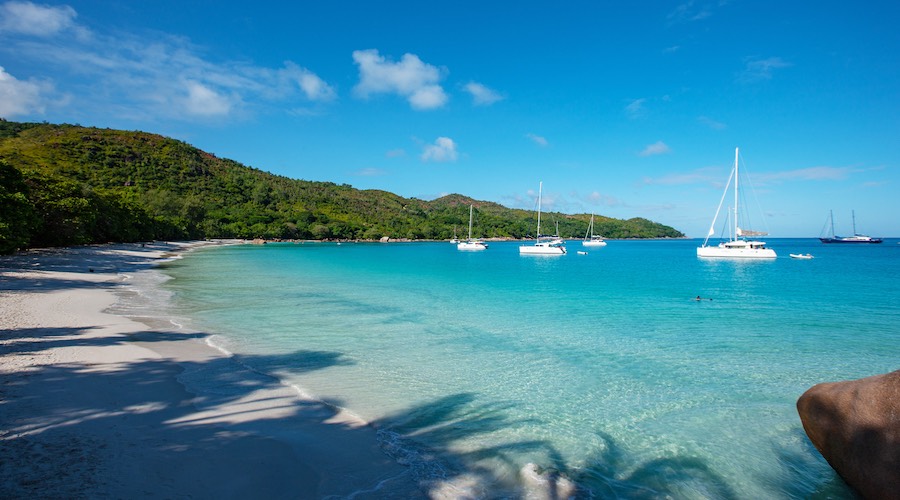 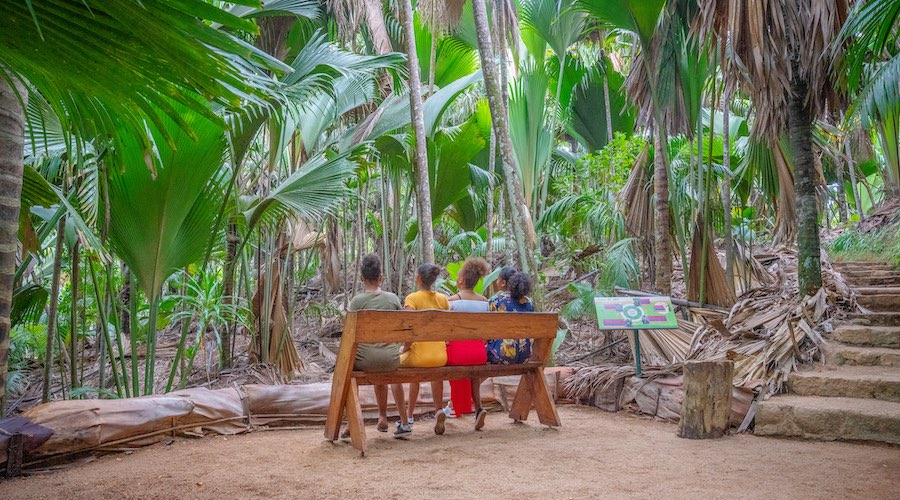 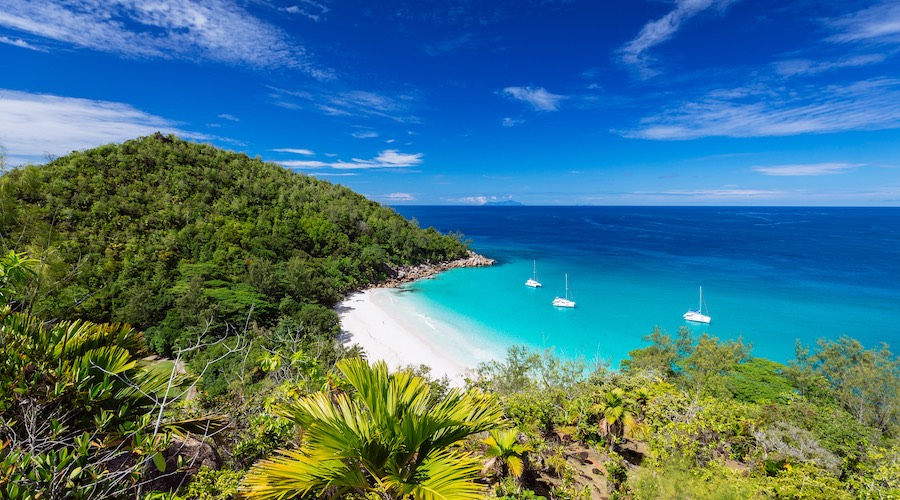 Praslin Island – The second largest island in the Seychelles.

Praslin constitutes the second largest island in the Seychelles and is almost centrally located, making it ideal for vacationers who wish to go from island to island to visit various exotic places such as Cousin, Curieuse, Saint-Pierre, La Digue and the Aride bird reserve. It is a perfect place for nature lovers who enjoy exploring different trails on the island in search of endemic species such as the black parrot. Before the colonization of the islands by the French in the mid-18th century, Praslin’s Côte d’Or was a den of pirates. The island was at first christened Palm Island upon its discovery, then Praslin in honor of the Duke of Praslin, French minister of the navy in 1768 at the time the “original possession stone” was erected on the island at Anse Possession. About a century and a half later, General Gordon (of Khartoum) became convinced that the Vallée de Mai was the original Garden of Eden. Praslin, like Mahé, has its own satellite islands that add value to any itinerary, especially for ornithologists since they are the last refuges of some of the world’s rarest birds.

Praslin Island – Seabed all to explore

These islands will seduce all lovers of nature and exceptional seabed. Classified as Nature Reserves, they do not allow any lodging but excursions can be arranged. Diving in Praslin, where settlements are scattered only along the coast, means observing immense coral gardens, sloping reefs and vertical walls and encountering a myriad of colorful fish such as unicorn fish, surgeonfish and parrotfish, but what attracts the most attention are the needlefish, distinctive for their curious threadlike shape.Because of the very strong currents at certain times of the year, diving is recommended for more experienced divers. Most of the sites are easily reached with about a 5-minute boat ride, but some are farther away and require up to 45 minutes by boat. A truly unique experience is the dive at Sister Bank, with a maximum depth of 24 m, it has distinctive rock formations and an abundance of fish; here, thanks to the currents it is even possible to encounter gray sharks, one of the largest coastal species. Leaving Praslin after a few minutes by boat, you reach the Bobby Rock site where visibility is good most of the year, and the main feature of this islet is the cleft in the rock, also visible from the boat, that extends all the way down to the depths and is worth a close look. Groups of gray sharks, up to 15 specimens that can reach up to 2 mt in length, live here; in addition, sea turtles, napoleon fish, large stingrays, whitetip reef sharks and much more can be spotted. The special feature of this site is definitely the moonlight dive, you dive at night directly from the threshold of the sea and can see various species of fish that are truly extravagant. The wonderful island of Praslin is also home to Skydive, for those looking for an adrenaline experience: the starting point is the airport, and after the jump, you land on one of the island’s most beautiful beaches, Anse Volbert Bay. Initially the facility will offer tandem jumping, the easiest way to approach this sport, which consists of being hooked up to an instructor who will guide the passenger for the entire jump; later it will be possible to take a course and learn the discipline of sport skydiving. You will be able to jump individually or in groups, and the jumps are designed to satisfy all levels of experience: in fact, children from 16 years old and up, people who have already had experience with skydiving but also people who are new to skydiving will be able to jump, all of which is possible thanks to the professionalism, skill and expertise of all the guides at the facility. At the airport, before boarding the plane, instructors will hold a short but intensive briefing to give clients the useful and necessary information they need to enjoy the jump into the void to the fullest and safest extent possible, check the harness and parachute, and proceed to board the plane prepared for the jump. Fleming was fascinated by the history of pirates who plundered the region’s rich merchant ships between 1600 and 1700, seizing precious stones, silver, and gold and hiding the loot in the Seychelles archipelago. One of the legends that intrigued him in particular, still cherished by Seychellois today, is the search for a pirate treasure hidden by the buccaneer La Buse (known as “The Buzzard”) under the fine white sand of Bel Ombre, a northern beach on Mahé Island. Over the years, a great many explorers have tried in vain to recover the riches hidden in the dunes or beneath the waves of the sea, but no one has yet succeeded.