Other islands of the Seychelles

Smaller and more remote islands are also worthy of discovery by sailboat, such as Bird, Cerf, Chauve Souris, Cousine, Denis, Desroches, Frégate, North, Silhouette, Round Island Praslin, and Sainte Anne. St. Anne’s Island, located just a 20-minute boat ride from Mahé, is noteworthy: the first settlement in the Seychelles arose here in 1770, then over time it became a whaling port and a military base during World War II. St. Anne’s is home to the National Marine Park (4 km from Mahé’s east coast), which has one of the largest coral areas, populated by sea turtles and dolphins, ideal for viewing marine life either by snorkeling or semi-submersible boats. Includes St. Anne’s, Stag, Medium and Round. A Hawksbill turtle spawning site can be seen on Sainte Anne, while 100 giant Aldabra turtles can be found on Moyenne. Denis Island, on the other hand, 85 km north of Mahé, is home to 50 hectares of forest, giant tortoises, various colonies of sea and land birds and offers conservation programs with a dedicated team of biologists.

In contrast, not far from Praslin is Cousin Island, a magnificent example of an ecotourism site and one of the first granite islands in the world to be declared an entire nature reserve. Cousin became the world’s first carbon-neutral reserve in 2010 after years of measurement and analysis regarding the full range of emissions associated with the island and examining opportunities for reduction (in partnership with Carbon Clear). The Cousin Reserve is a true nature treasure and has become the first IBA, Important Bird Area, site of significance in the Seychelles and the western Indian Ocean where 250,000 birds nest. Among them are the Flycatcher, the Gray-headed Turtle Dove and the Moorhen. The island is equally home to numerous Terns, “Noddi,” Frigates (or Sea Eagles) and Puffins (or Procellarians). Cousin constitutes a place where some endangered species, such as the Seychelles Blackcap and the Seychelles Song Magpie, could be saved. There is a colony of geckos on the island, giant turtles imported from Aldabra, and numerous sites chosen by Hawksbill turtles during the spawning period. It is also the favored home of 12 Seychelles Sasha (magpie-rooster) out of only 70 in the world. It possesses a beautiful 1-km-long white sand beach that adorns the east coast.

Aride Island, on the other hand, was classified as a Nature Reserve in 1967. Since 1973, when British businessman Christopher Cadbury redeemed it and placed it under the protection of what is now the Royal Society of Wildlife Trusts, the number of sea birds has increased to the point where it is the largest colony in the world and a breeding ground for 18 species. Then again, 5 endemic bird species have returned to live there. Aride is famous for its population of Pink Terns, small Yellow-billed Phaeton or Phaethon, Marianna Nodds, Dougall’s Terns and Audubon Smurfs. More than 1.25 million sea birds can be glimpsed during the nesting period. Its 70 hectares are home to the densest population of lizards on Earth with, in particular, 3 species of shiners, 3 species of geckos, and 3 species of harmless snakes. Two species of sea turtles, green turtles and Hawsbill turtles, regularly occupy the beaches-the island has become a spawning ground for these turtles. It is a unique habitat for some of the rarest plants in the Seychelles such as the rare and valuable Wright’s Gardenia (Rothmannia annae) or locally called “Bois citron” and a recently identified endemic variety of Peponium (from the cucumber family). Aride offers numerous impressive dive sites. More than 400 varieties of fish, whale sharks and flying fish can be seen at the edge of the reef. 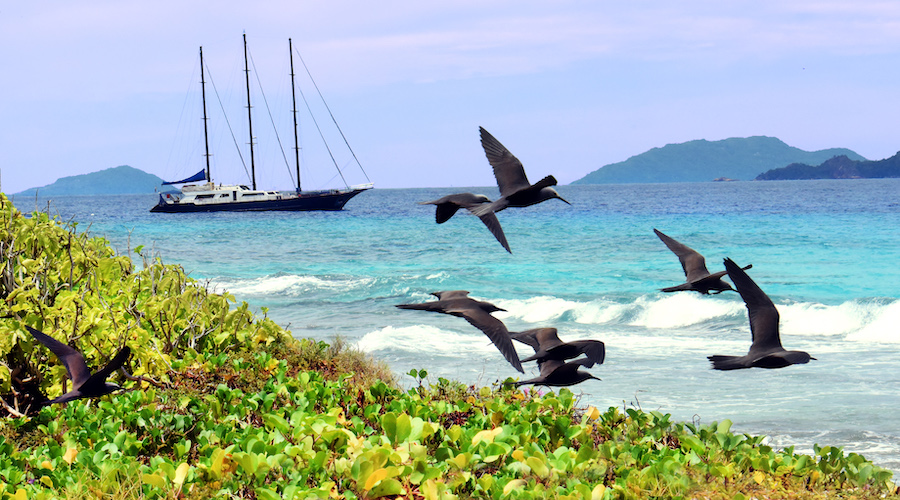 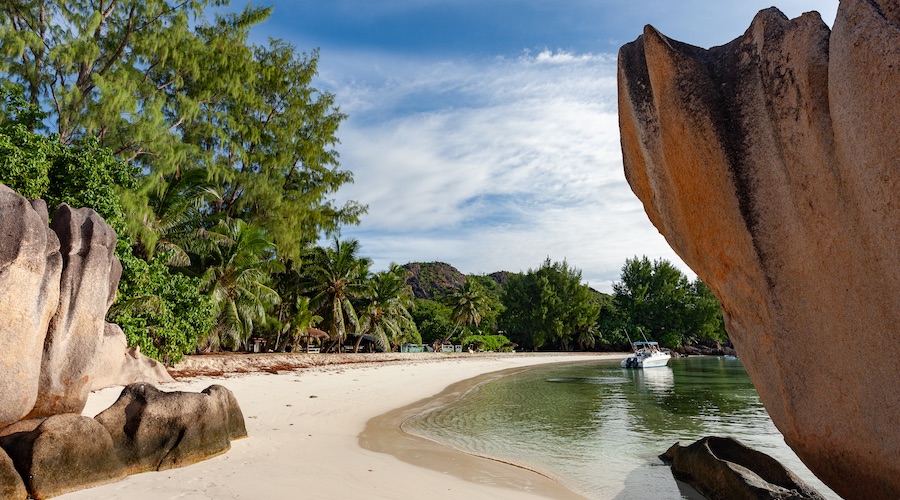 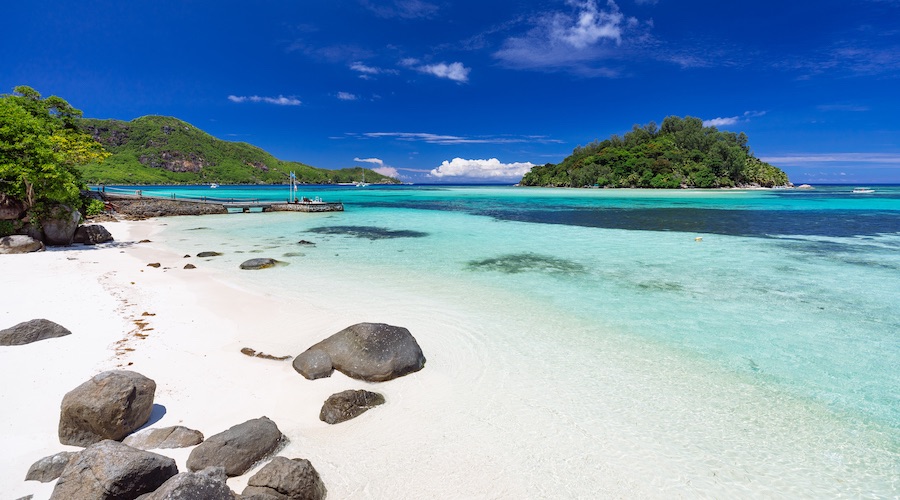 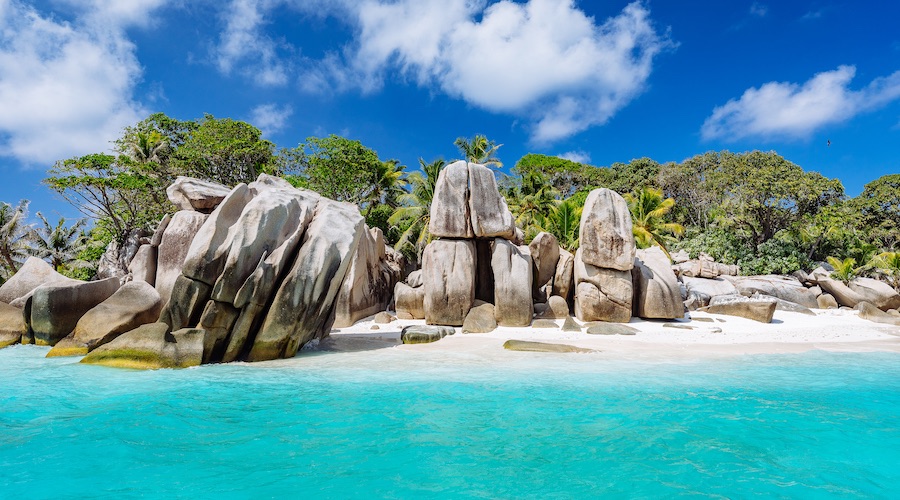 While on the northwest side of Praslin is Curieuse Island, another nature reserve once known as “Ile Rouge” because of its red soil. The island was probably renamed after the explorer Marion Dufresne who visited Praslin in 1768 on the ship “Curieuse.” Its shores were once home to a colony of lepers, while today it is home to a breeding ground for free-roaming giant tortoises and a nesting site for sea turtles. Curieuse is the only other island, besides Praslin, where Coco de mer grows in its natural state. Saint-Pierre, on the other hand, is part of the islands of the Côte d’Or Bay in Praslin and takes the form of a tiny islet with a granite outline interspersed with coconut palms that has become the quintessential representation of the Seychelles. Saint-Pierre is about 1.5 km from Pointe des Zanguilles on Praslin’s fabulous Côte d’Or beach. At one time some coco de mer grew there in the natural state. The islet is an ideal place for swimmers, diving enthusiasts with fins, mask and snorkel, and boaters who find it an idyllic setting to admire magnificent sunsets.

Finally, La Digue is surrounded by a variety of islands whose exceptional seabed is worth exploring on an excursion or while sailing, diving underwater or diving into the underwater world with fins, mask and snorkel. Among them are the islands of Petite and Grande Soeurs, the latter of which is particularly famous for its unique views and excellent hiking opportunities, underwater diving due to its magnificent clear waters and prolific marine life. Protected by a coral reef, the underwater seabed is exceptional here. Along the reefs, you will encounter sea turtles and iridescent-colored tropical fish in bright, crystal-clear water. The island is shaped like the number 8 and has two superb beaches on each side of its sides. Cocos Island is located 7 km north of La Digue, in immediate proximity to its neighbors Félicité and the islands of Petite and Grande Soeurs. A granite formation, it consists of a few reefs and palmettos, and its translucent waters allow you to admire the colorful local underwater fauna: stingrays, sea turtles or, for the lucky ones, small coral sharks. It possesses a very small white sand beach and has been classified as a National Marine Park since 1996. Marianne Island once a coconut plantation in the 1940s, now belongs to the “Seybrew” group of brewers. It is one of the best underwater dive sites, recognized worldwide for its supernatural underwater scenery with immense steep upright reefs measuring 10, 20 or 30 meters in height and attracting large fish, especially some gray reef sharks, all females, which remains an enigma, but equally eagle rays, barracudas, sea turtles, etc. The depth of this exciting site is 27 meters and caters to guaranteed diving only. Félicité Island is a picturesque granite island with a twisted relief: it was a coconut plantation until the 1970s, counting a small population of about 50 people. The island is now home to a luxurious resort with prestigious villas, spas and a wide range of unique experiences for the modern traveler. Félicité’s superb beach, La Penice, makes for wonderful swimming or excellent diving.

Report an abuse for product Other islands of the Seychelles