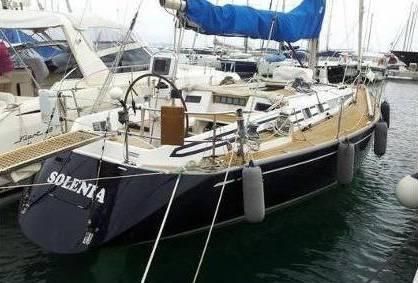 At the Milano Yachting Week – The digital boat show you will also find the top of the used collectible boats that over time will certainly increase their value, as happens with vintage cars. Why? Simple, they are icons of yachting history.

One of these used boats is the Swan 40 Frers project of 1992, which is called Solenia, for sale and visible in Tuscany, kept in amazing conditions. A real unique object that can be found in the stand of Nautor’s Swan Brokerage.

Used boats, the history of the Swan 40, Nautor’s icon

The Swan 40 design Frers is a boat with a particular history, which marks a historical period of Nautor’s shipyard.

A new 40-foot Swan is needed

But in the early 1990s, Nautor guru Pekka Koskenkyla realized it was time to go back to producing a “small” 40-foot Swan.

So he commissioned the Argentinean studio of German Frers, who had become the exclusive designer of the Finnish shipyard (and still is today!), to design a new 40-footer.

Frers set to work and created a small masterpiece. The first example of the second version of the Swan 40 touched the water in 1992 and remained in production for nine years, until 2001, produced in 58 units.

The secrets of Frers’ Swan 40

Its longevity is due to an extremely elegant line, with a low freeboard, a very well-balanced retractable deckhouse, pronounced lines and an exceptional maximum width of 3.93 metres for a boat that is 12.27 metres long overall. And then Frers’ touch of class, a steeply sloping stern with her signature rounded chamfer at the hull/ deck connection, giving a touch of class and instant recognition.

With maximum width at the hull centerline, the saloon is the Swan 40 Frers’ strong point, with two opposing sofas and the upper berth on the port side. Great boat!

Go and visit it now

The Swan 40 Solenia, which, as we said, can be seen in Tuscany at Argentario, is the model n. 48 released from the shipyard and finished in 1999. It is probably the best preserved example of Swan 40 in the world. Go now to see HERE how it has been refitted over time so as to be, while respecting the original features, in like-new condition. You will find pictures, descriptions, plans, features. And you can immediately ask for more information about this icon of yachting, HERE.